When a woman becomes pregnant, she needs prenatal care. And while we hope all women experience the same quality of care in the United States, a new survey of Gen Z and Millennial mothers by What to Expect for this year’s #BumpDay in July shows that is not the case.

The survey’s findings are a wake-up call that socioeconomic status and race play a big part in the type of care a mother receives during her pregnancy. While there were some positive findings, the study is a reminder that we need to work harder for all mothers.

What to Expect surveyed 1,406 Gen Z and Millennial mothers in spring 2022 who were pregnant or had given birth in the previous 12 months. Significant findings in the study included:

“Disparities in care are a major reason why the U.S. is falling short regarding maternal health,” the report says. “And What to Expect’s findings are a stark reminder that the quality of prenatal care a mom receives in this country varies enormously depending on where she lives, her income, and the color of her skin.”

While receiving prenatal care by the second month of pregnancy is ideal, that is not happening with Gen Z and Millennial Black mothers. The survey found that 70 percent of white women were likely to have their first prenatal appointment by eight weeks, compared to 59 percent of Black women, who saw their practitioners for the first time at 13 weeks or later.

The later first prenatal appointments delay routine pregnancy care. Most women surveyed had ultrasounds during the sixth and 12th weeks. Ten percent of Black and Hispanic/Latina women said they had their first ultrasound between weeks 13 and 15.

Of the women surveyed, Black mothers reported having the most complications during their pregnancies due to high risk. This affected about one-third of Black Gen Z and Millennial mothers, which is about 32 percent. Thirty-three percent of Black mothers’ labors were induced because of a health issue with the baby, compared to 16 percent of the total mothers surveyed. Black moms were more likely to have an emergency C-section than other mothers.

Sadly, socioeconomic factors heavily influenced how mothers-to-be experienced prenatal care. The survey showed that mothers who were single parents or who had household incomes below $75,000 had their first prenatal appointment further into their pregnancy than mothers with higher incomes.

Ninety-six percent of those surveyed said they were confident in their ability to speak frankly with their provider during pregnancy. But of those with household incomes of $125,000 and above, 100% felt their practitioner always listened to their concerns. The survey also reports that women with higher incomes have better access to telehealth services.

Where a Patient Lives Plays a Crucial Role in Their Care

“Millions of Americans live in ‘maternity care deserts’ with limited access to prenatal care. Although most of these ‘deserts’ are in rural parts of the country, about one-fifth are in urban areas. Living further from your maternity care provider or having less access to them can make it harder for moms-to-be to keep up with prenatal appointments and make emergency care less accessible,” the report says.

It may come as a surprise, but women living in rural settings reported feeling confident in their providers and that their providers consistently listened to them. Those mothers in urban areas did not feel respected by their providers. Urban dwellers were also five times more likely not to receive breastfeeding support in the hospital.

Doulas are trained professionals who provide mental and physical support and information to women in all stages of pregnancy and childbirth. However, they are still not the norm. However, Black mothers are most likely to use them. This could be partly because these skilled practitioners are helping to reduce maternal mortality rates.

Nine percent of moms reported using a doula before or after pregnancy or during childbirth. Rural mothers were the least likely to use a doula.

It Is Not All Bad News

“The survey revealed some good news, namely that the vast majority of pregnant women do receive prenatal care,” the report says. “Eighty-five percent of the moms-to-be we surveyed have had at least one prenatal appointment, while an additional 11 percent have their first appointment scheduled.”

#BumpDay occurs every third Wednesday in July. It is a way to help spread the word about the importance of proper prenatal care for all women. It continues to bring awareness to the discrepancies between prenatal care for women of color and those from lower incomes. 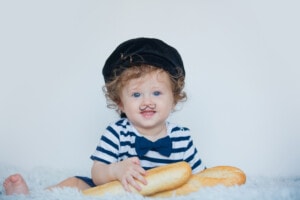 201 French Names for Your Baby