12 Things to Consider When Choosing a Baby Name - Baby Chick

12 Things to Consider When Choosing a Baby Name 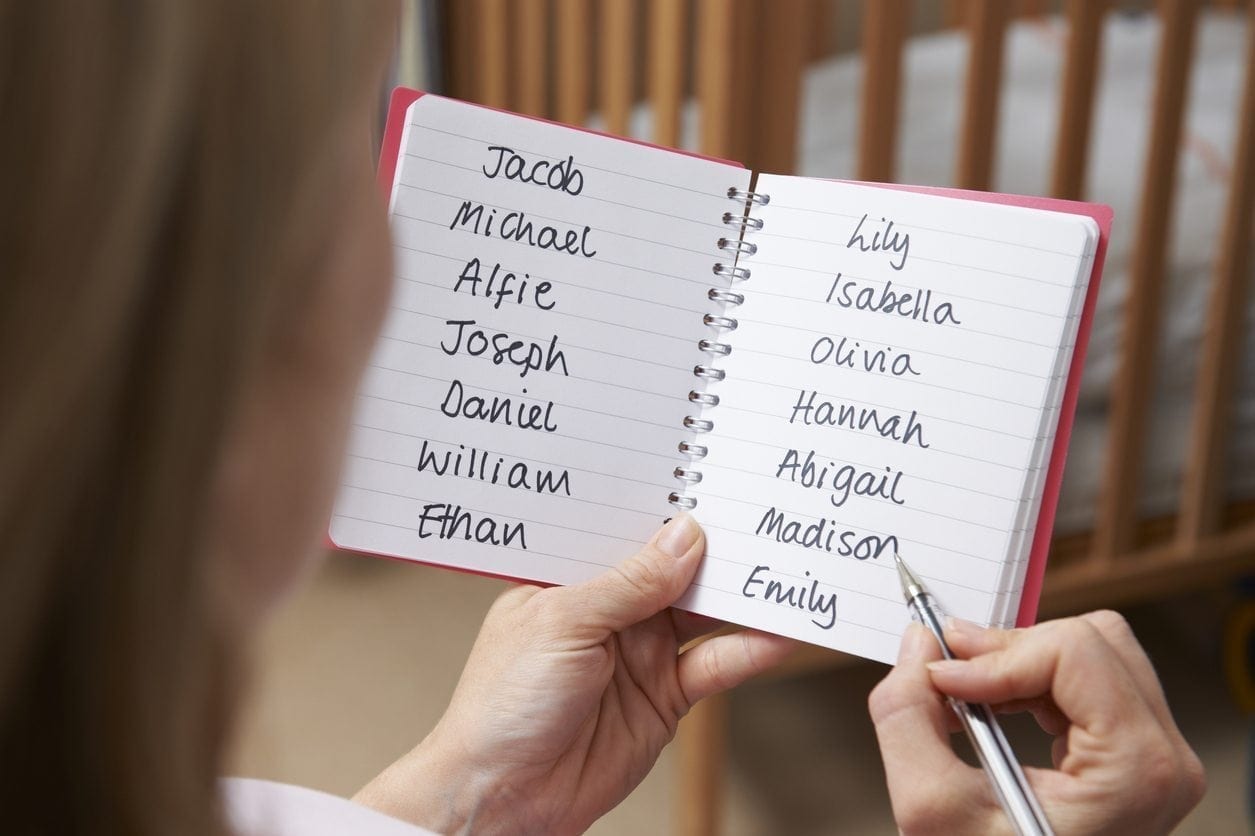 There’s a lot of pressure when it comes to picking out a baby name. I mean, it is a permanent decision that will remain with your child for the rest of his/her life and on your family tree for eternity (no pressure). Some people also believe that a name can determine the type of personality their child will have! This is why it can be tough for some families to narrow it down to one final choice, while for others, it’s super easy. When we found out we were having a boy, the first thing I did was start looking at names. I had a girl name already picked out, but not… Read More

There’s a lot of pressure when it comes to picking out a baby name. I mean, it is a permanent decision that will remain with your child for the rest of his/her life and on your family tree for eternity (no pressure). Some people also believe that a name can determine the type of personality their child will have! This is why it can be tough for some families to narrow it down to one final choice, while for others, it’s super easy. When we found out we were having a boy, the first thing I did was start looking at names. I had a girl name already picked out, but not a boy name. As I began to scour all of the options starting from A through Z, I soon realized that there were some things that I needed to take into consideration before I chose a name for our son. Some of these may not apply to you or may be silly, but they can help you pick the perfect name for your upcoming baby. They did for us!

As I said before, this may not apply to some soon-to-be moms. Some of you may have already called dibs on choosing the baby’s name. Maybe you don’t have a partner and will be able to choose the name on your own. Or maybe you know that the name of your child will be a Jr. or a III or IV in the family. However, if you do have a partner and are trying to choose a name, you probably should both like it. Talk to your partner and ask him if there are any names he already likes or has any preferences.

I decided to first come up with a list of names that I liked and asked my husband if there were any types of names that he preferred. Did he prefer family names? Long names? Short names? Old names? Newer, more popular names? This helped us whittle down our list and better understand what names would work best for our family.

2. Are there any hard rules that either of you has?

Some people have hard rules when it comes to names. For example, some want it to be only two syllables. Or end in a vowel, or not end in a vowel, or start with a certain letter. Figuring out what you don’t like and what your spouse doesn’t like can sometimes be the best thing to help lead you in the right direction.

As for my husband, Brian doesn’t like “cutesy” names; basically, any name that could result in a nickname ending with a -y. For example, Andrew = Andy, Thomas = Tommy, Charles = Charlie or Vincent = Vinny. You get the idea. It’s a silly rule, but that’s his preference. This narrowed my list down quite a bit.

I always thought I would pick a name for my child that would not be in the top 20 list of baby names, but once we found the name that you both loved, it didn’t matter to me anymore. You may feel the same. Liam was the first name that I really loved and the only name that my husband liked. No exaggeration there. Even though that name was the number three most popular baby boy name in 2016, obviously, it ultimately didn’t matter to us. We still picked it. It had more meaning to us. I also like that the name Liam was the first name that I asked my husband about the same day when we found out we were having a boy. I think it was meant to be.

I don’t know about you, but I love family names. I think it is so special to have a name with family history and meaning in your family tree. However, some people aren’t as keen on family names. They feel that they are outdated and boring. This is why you should talk about this with your family. Maybe you both don’t have any family names that either of you likes. That may help you make a decision not to choose a family name for your baby.

Our son’s name, Liam, is kind of a family name. Let me explain. My grandfather—who passed away this year in April—was named William, and Liam is short for William. I also considered naming my son after my brother, Ian, but I wanted my son to have his own identity since my brother is still living. I thought that the name Liam sounded similar enough to my brother’s name, and it also pays homage to my late grandfather, William. This is why I ultimately didn’t care if the name was popular. I loved it, and I knew it was the perfect name for our son. Because to me, family is everything, and there is no greater way to honor the ones you love than by naming your child after them. We also chose Brian’s middle name, Coe—which is also his father’s middle name and is also his grandmother’s maiden name—for our son’s middle name. Family names are special to us.

5. What are their initials or monogram?

If you are from the South, you have definitely thought about this. What will their initials or monogram spell? For example, my uncle’s name is Thomas Randall Dismukes. His initials spell TRD. As a child, he was called “turd” and made fun of. This may not be a big deal to you. That’s okay too. It just might be something to consider.

We felt safe with Liam’s initials (LCS) and monogram (LSC).

6. Does the name remind you or your partner of anyone you don’t want to be reminded of?

I feel like EVERYONE has this problem when going over baby names with their partner. A name will be thrown out there, and one of you will be reminded of an ex-boyfriend, an ex-girlfriend, an ex-friend, an old boss, a troubled kid, a promiscuous girl, etc. This will usually limit your list as well.

Luckily for us, neither of us knew any adults named Liam. Except for Liam Neeson and Liam Hemsworth. Which I am totally okay with. 😉

Kids are clever and sometimes cruel. They can pretty much find any way to make fun of a name, so this can be tricky to avoid. But ask yourself if the name you like rhymes with anything. Can it be shortened into something else? For example, Victoria may go by Vicky, then be called Icky Vicky. But it doesn’t have to rhyme at all. For example, the name Richard. You may not want your kid to be called Dick. Yes, these are silly things to think about. But again, kids can be cruel. I’m not saying don’t name your child these names—I personally like these names—I’m just saying consider this and determine if that’s something that will bother you before you choose a name.

Personally, I wanted a first name for our son that you could read and automatically know how to pronounce. Other people like to choose a unique name or cool way to spell their child’s name. This may confuse people when they read it aloud. Decide if that matters to you before you pick a name and its spelling. Do you want people to mispronounce it or ask them each time how to spell or say their name each time they are called upon?

9. Meaning and inspiration of the name

A lot of people like to choose their child’s name by looking at its meaning. I have a friend that chose her son’s name Gabriel because not only did she love the name, she really loved the meaning, “man of God,” “devoted to God,” “a hero of God,” or “God is my strength.” That may help you find a name that you truly love. As for us, the meaning behind a name really didn’t matter, so we didn’t look them up.

I will never forget when one of our writers, Sarah, told me that she always loved the name Blaire for a little girl. The problem is her married last name is Ring. So that would have made her daughter’s name Blaire Ring. Blar-ing. See how that doesn’t work . . . It’s like the movie The Wedding Singer, “Julia Gulia.” It just doesn’t work. This point, I think, should be considered by ALL soon-to-be parents.

Maybe you have other children and want your kids’ names to sound good together. Maybe you want all of their names to start with the same letter or have the same number of letters or the same amount of syllables. For example, if your first child’s name is Samuel, you may not want to name your second child a name like Ignacio. But maybe you do! Some people want the names to sound similar when they say all of their kids’ names. This may not be a big deal to you, though.

The last thing I would consider is if having a unisex name would bother you. Some are really cute, like the name Taylor. I’ve met both girls and boys named Taylor. I’ve also met boys named Whitney and Ashley and girls named Bradley, Cooper, and Spencer. I personally like unisex names, but I know who others don’t. Talk about this with your partner to see if this is something that you need to keep off the baby name list or if they can stay.

Do you have any other tips to share when choosing a baby name? Was there anything that really bothered you or helped you when you picked your child’s name?