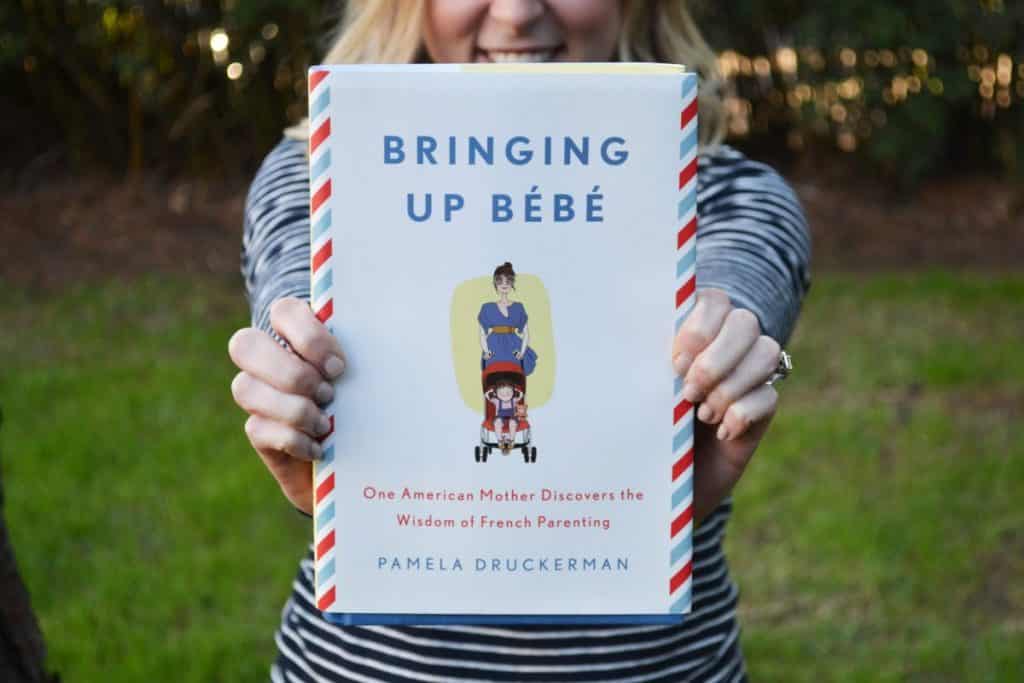 This New York Times Bestseller has had a lot of parents talking over the years. Can it really deliver on its promise to guide you to raise bright, well-mannered children while maintaining a full adult life? Well we’ve read the book and had a Book Club Live on Facebook discussing it. Watch the video below after Nina’s notes to learn more.

If you’d like to read the book Bringing Up Bébé but don’t have the time to, read Nina’s Notes below to get the full scoop on each chapter. 🙂

At the beginning of the book, Pamela Druckerman (the author), gives us a glossary of French parenting terms. After reading a few of them, I was curious to open the next couple of pages and see what it was all about. My favorite ones were:

In her introduction, Pamela Druckerman is at a French restaurant with her 18 month-old daughter who was running round making a mess and lots of noise. She looked, around an notched that the other French children were  “sitting contentedly in their high chairs, waiting for their food, or eating fish and even vegetables. There’s no shrieking or whining. Everyone is having one course at a time. And there’s no debris around their tables.” She wondered, “Are French kids just genetically calmer than ours?” This set her on an exploration of French parenting.  After years of investigative work, she thinks she’s discovered what French parents are doing differently. She finds out that to be a different kind of parent, you don’t just need a different parenting philosophy. You need a very different view of what a child actually is.

Chapter 1: “are you waiting for a child?”

READ MORE
Is Being a Working Mom Bad for Child Development?

Chapter 11: “i adore this baguette”

READ MORE
7 Ways to Make Summer Memories for a Lifetime

“the future in french”

Join us on Facebook Live as we discuss the controversial book Bringing Up Bébé and French parenting. We're wine-ding down the evening with a delicious box from Wine Down Box and discussing all the hot topics from the book. Grab a glass and join us in the conversation!

We want to thank Wine Down Box for the delicious bottles of wine and treats from their subscription boxes. We loved them! It was the perfect way to “wine-d down” the evening and discuss an interesting book. Two thumbs up!

About the Author / Nina Spears

Nina is The Baby Chick® & CEO of Baby Chick®. She is a baby planner, birth doula, postpartum doula, childbirth educator, newborn care specialist, and a mother. With over eight years of experience, she has supported hundreds of families during their pregnancies, births, and postpartum journeys.

❤️ Oxytocin: All About the Love Hormone ...

Hope your Valentine's Day was filled with ...

❤️ Low Cost Date Night Ideas for Couples on a ...

If you're wondering what to gift her on ...

And the quickest way, partners, to get murdered. ...

It looks like a murder scene up in here. ...

💜 How to Show Love to Your Partner in Labor ...

It's a very real struggle that many mothers ...

❤️ How Giving Birth Made Me Love My Body ...

The perfect combination of #selfcare and female ...

🤰 What You Need to Know About Implantation ...

💙 How to Encourage the Bond Between Dad and ...

Sometimes, the combination of busy or boring days,...

View
1892 76
Open
Sometimes, the combination of busy or boring days,

Pregnancy Affirmations: 10 Things to Tell Yourself While Pregnant – Podcast Ep 26

Low Cost Date Night Ideas for Couples on a Budget

Don’t Give Up: It May Not Be Low Milk Supply

How to Show Love to Your Partner in Labor

How Giving Birth Made Me Love My Body