Second Baby Guilt: How I Am Working Through It - Baby Chick

Second Baby Guilt: How I Am Working Through It

Note from the author: I’m getting a little bit deep and raw about something personal to me: second baby guilt. There may even be a tad TMI here and there, but hey, we’re all adults. I hope this article helps any moms struggling with the same issue realize that it’s completely normal and you’re not alone. After all, that’s what Baby Chick is all about…inspiring, connecting, and uplifting each other. Thanks!

I’ve struggled with whether or not to write on this topic for various reasons, like feeling guilty for feeling guilty. Or I am feeling like I’m throwing my “baby-making” success in the face of others who may be struggling—fearing backlash from readers, friends, or family. And that big one of actually admitting these feelings to myself. That’s a hard one.

But then there are the reasons FOR writing on this topic: having a therapeutic outlet for myself, seeking advice from moms who have walked the same road, and normalizing these feelings for those walking the same journey.

So here it goes—my big fat second baby guilt and how I’m getting over it, slowly.

My husband and I knew we wanted to space our kiddos about 2-1/2 – 3 years apart. So it didn’t surprise me when we started having the conversation in the spring about when we would actually pull the goalie, so to speak. I got off birth control in March because my hormones were in a terrible imbalance causing everything from dramatic weight and muscle-mass loss (to the point where co-workers asked if I was sick). I also had headaches, dizziness, loss of libido, and decreased energy.

We knew we needed to be careful after I stopped birth control. It had only taken one shot at getting pregnant with our first, and we had three incredibly special weddings coming up that I did NOT want to be sick during. (Okay, I also wanted to guzzle some champagne with my besties. Shame on me.)

To avoid an “oops baby,” I began tracking my ovulation immediately. We made it to July, and through the weddings and other random events I hadn’t wanted to miss out on, and then my husband was ready to start trying. I’m not saying that I wasn’t ready; I was. I was just also beginning to feel an overwhelming sense of sadness. My son, Fischer, had been my everything for the past two years, and I’d never felt so complete. But this is what we had planned, right? If I got pregnant in July, the kids would be as close to our 2-1/2 year age difference as possible.

My husband didn’t understand why I was hesitant. I told him I would like to wait until August. I thought I would be ready by then. Not to mention that I knew I was going to be out of town during the time I was supposed to ovulate, so I thought I had the perfect sabotage.

‘THOUGHT’ being the keyword, folks. We did the deed on July 3rd, the day before I left, and one week later, I KNEW. Through a series of interesting ailments throughout my life and struggling with an autoimmune disorder that frequently strikes with a vengeance, I am particularly aware of the goings-on inside my body. So I just knew. Two weeks later, I saw the first of multiple pregnancy tests (only 4 this time! last time, it was 9!). My husband was shocked, but should he have been? Probably not.

I cried. And I cried. And I cried some more. Honestly, they weren’t tears of joy. They weren’t tears of joy for some time, and that PAINS me to write. I would never want this new baby to think they weren’t wanted. Of course, I should have been ECSTATIC about this new little life, the growing of our little tribe, the partner-in-crime for Fischer. But I couldn’t get over the feeling of loss that seems to go hand-in-hand with this addition. Funny, right? Adding and losing at the same time… it’s not supposed to work that way. 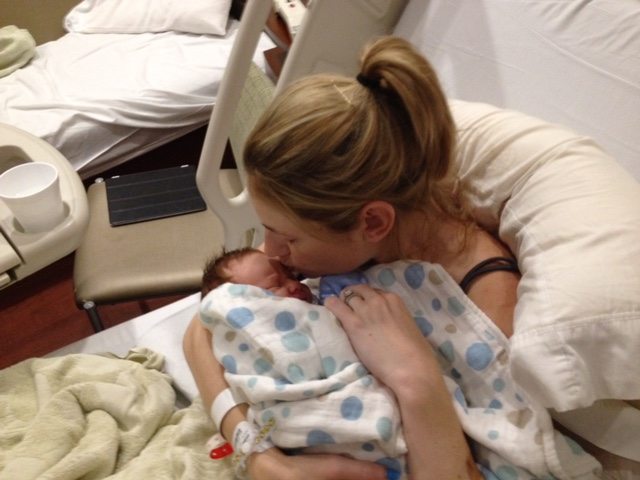 So what do I think I’m losing, exactly?

I guess my 100% commitment to Fischer and the maternal bond with my ONLY child. He’s been my whole world and best little friend for the past two years. I couldn’t imagine loving someone else how I love him, and I fear there just isn’t enough to go around. He’s losing the spotlight and, at two years old, is so not ready to share my love. I fear that my child will resent me, and I can’t even handle the thought of that.

For a couple of weeks, I was losing my mind with grief. For his birthday every year, I vowed to write a letter in his little journal that I had made especially for that reason. Last year the pages were stained with tears at the realization my baby was turning one. This year, the hot tears of guilt left streaky pen marks. Oy. I hope one day we look back and laugh.

I tried talking to my husband about this, but he didn’t get it. They never seem to understand these things. Luckily, two of my very best friends had just recently become second-time moms, so I reached out to them. In fact, I had reached out to them months ago to voice my fears and concerns, and I was relieved to hear that they had gone through the same sorts of emotions.

But I was happy to hear how the additions to each of their families were NOT a loss but a huge, huge gain. They told me there was more than enough space in their hearts to welcome this second little love. And that they adored seeing the first sibling accept the second. They told me their families became even MORE “complete” when they laid eyes and hands on their new little person. 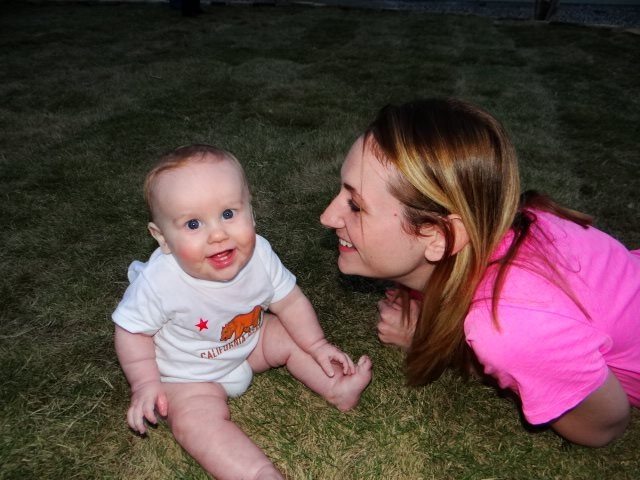 And yet, they were also brutally honest about the changes, and I thank them for that. (And for the continued harping I’ve been doing about this transition.) Yes, you’ll lose time with your first baby, and it’s hard for them to understand. Yes, you’ll feel guilty about it. But in those moments, guess who gets to step up? Daddy. My friends told me that to see the bond grow between their partner and child was something altogether more special.

And yes, it’s hard to manage schedules with two babies, and it’ll drive you a little batty. In this way, your first baby suffers a little bit too because sometimes you’ll be too exhausted to go to the park. Yes, you’ll forget to take one million photos of the poor second child. Yes, you’ll be dead tired with the round-the-clock feedings for the new baby and trying to keep up with the high-energy toddler. This went on and on.

They’ve both been emphatic with this BUT, your heart will swell all over again, and you won’t be able to imagine life without BOTH little loves. 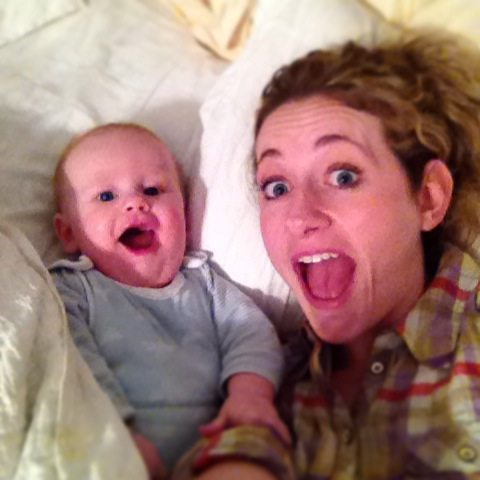 So, where does that leave me?

It took us a few weeks to begin telling people we were expecting again. Our friends and family were obviously so excited for us. I wanted to be excited, too, and didn’t want to fake it. So, until I had begun to reconcile my feelings, we kept the news close. At 6 weeks and 4 days, we had our first prenatal appointment and (thankfully) heard the heartbeat. I captured this on video and even got Fischer to say “Baby” at the exact right moment. I think it was after this that my heart started to make a turn, and I actively began to imagine life as a family of four instead of three.

At our next appointment, I was by myself and got to see an amazing ultrasound of a very, VERY active little Brussels Sprout (the current size). I cried like a baby. This time they were tears of JOY. I sent the video to my husband first, then to quite a few other people, and they all shared in the happiness and welcomed anticipation I felt and continue to feel. 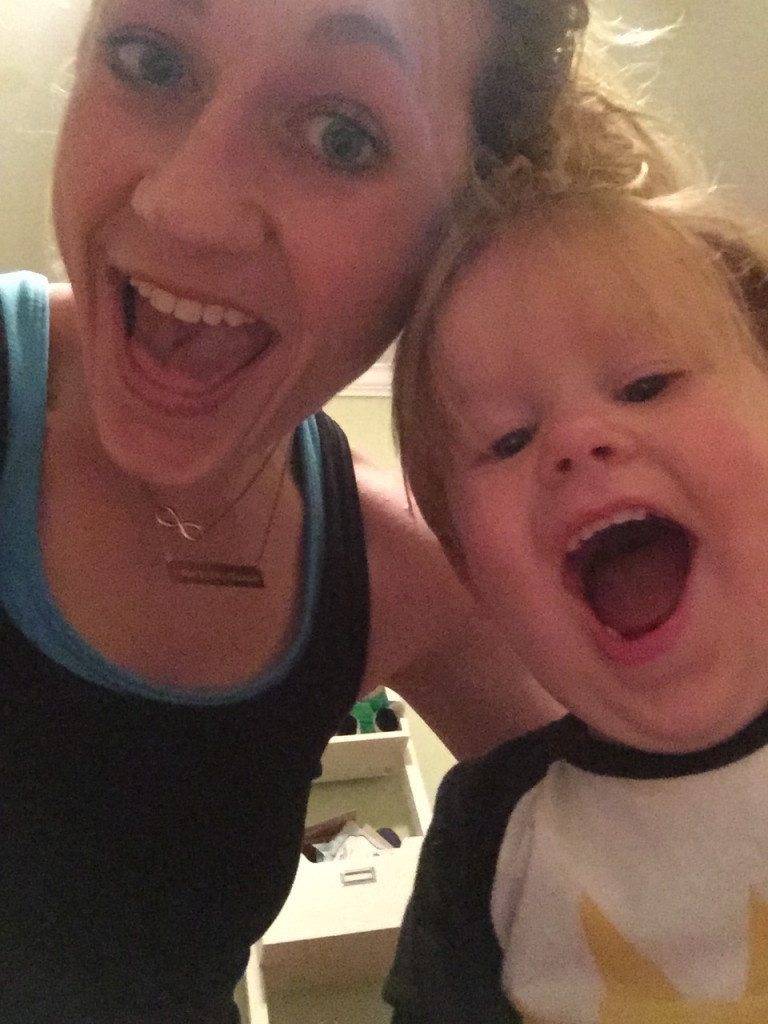 Do I still feel guilty?

When Fischer doesn’t understand that he has to share the spotlight, I get sad. And then I realize (and hope) that there will be double the FUN in the spotlight for Fischer and his best pal. I also know that as Fischer grows up, he’s also growing away and will need me less and less in the way he needs me now. That realization is both a comfort (for the current situation) and a complete nightmare as I never want my baby to grow up!

And then I wonder how I can feel THAT guilty when I know how much spoiling will be done between now and March? Let’s hope Fischer doesn’t end up TOO rotten at the end of this because I see a lot of trips to the zoo, museums, toy stores, ice cream shops, pet stores, and more in his future!

So, THANK YOU, friends, for letting me vent and share this. Again, it was a struggle for a lot of reasons. As moms, we are supposed to be “superhuman,” right? And superhumans don’t harbor these types of feelings. But, well, we AREN’T superhuman, and we DO have a vast range of emotions, each one as valid as the next. If you’re in the same boat as me, let yourself go through it. The grief, the excitement, the anxiety. All of it because it’s 100% normal.