This is a photo of the first time I held my twins, Arthur & Heidi. It was 33 hours after they were born. I waited two days after this picture was taken to see them again. Because within minutes after the twins were delivered by emergency C-section, I was left fighting for my life in intensive care. While I didn’t know then what was wrong, I came to find out I was suffering from a little-known condition called HELLP Syndrome. 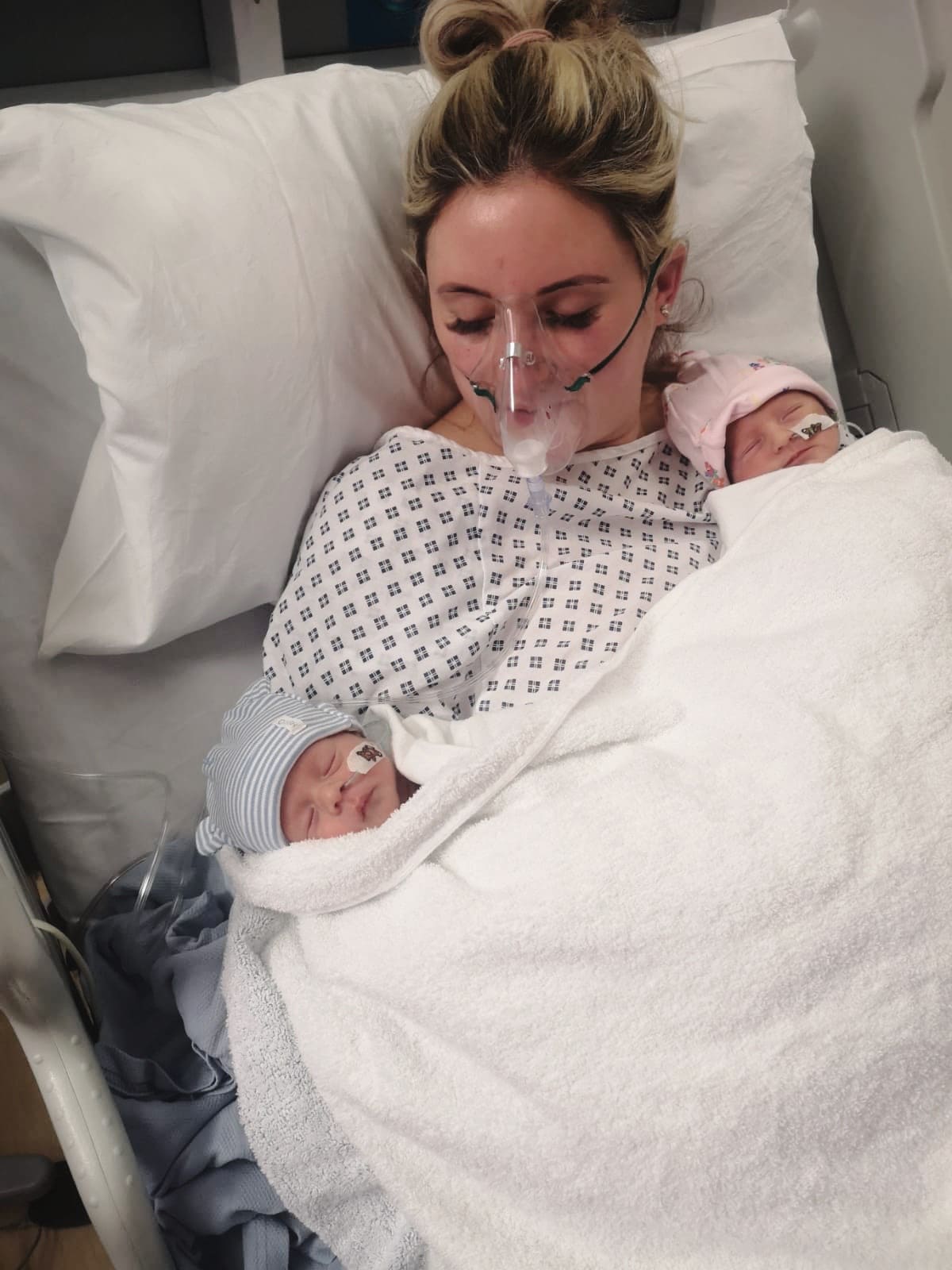 What is HELLP Syndrome?

HELLP syndrome is a rare but life-threatening complication of pregnancy. It is most common in women with eclampsia or preeclampsia. HELLP typically occurs in the last 3 months of pregnancy (the third trimester) but can also start soon after delivery. HELLP syndrome is named for the three features of the condition:

The cause of HELLP is unknown. If it is not diagnosed and treated quickly, HELLP can cause severe complications for the mother and the baby. Treatment for HELLP is to deliver the baby as soon as possible.

What are the signs of HELLP?

The symptoms of HELLP can be vague because they can also occur in a normal, healthy pregnancy. Typical signs of HELLP include:

Who is at risk for HELLP?

It is believed that HELLP syndrome affects about 0.2 to 0.6 percent of all pregnancies. About 4-12% of women diagnosed with preeclampsia will develop HELLP syndrome. Approximately 70% of the cases develop before delivery, with the majority between the 27th and 37th week of gestation. The remainder of the cases present within 48 hours after delivery.

How HELLP Syndrome Affected Me

I had an amazing pregnancy. I never suffered from anything apart from slight heartburn. But, at 33 weeks, I woke up feeling dizzy with a severe headache. My heartburn was so bad that I gave up even trying to eat. I had trouble seeing, and I was constantly throwing up. I went to the hospital (maternal-fetal assessment unit) and told them my symptoms. The midwives checked me for preeclampsia. But I did not have protein in my urine or high blood pressure, which are common symptoms of pre-eclampsia. Therefore, I was told to go home and rest. At home, my symptoms continued. I was in and out of the hospital every day until Arthur stopped moving, which was flagged up by my sonographer. That is when the hospital determined I would need an emergency C-section.

The doctors later told me my liver had started to fail. This meant Arthur’s placenta had stopped providing him with the oxygen and nutrients he needed, something they only found out once I was diagnosed with HELLP. Consultants told my husband and me that Arthur would not have survived if I had gone 12 more hours without delivery.

We knew something was wrong soon after my C-section.

As they were preparing me for my emergency C-section, my husband and I were told I would be put under anesthesia due to my low platelet level. However, when we got to the surgery doors, my husband was handed scrubs, and we were told they were keeping me awake. I was so relieved to know I would see the twins being born. Heidi was born first, followed by Arthur two minutes later. Both were rushed off to the NICU in what I can only describe as the speed of light.

After my babies were whisked away, I was wheeled into the ICU because I had become blue and unresponsive. While we didn’t know it at the time, HELLP had started to attack my organs. My liver, kidneys, and lungs had started to fail. My platelet levels were dropping, and my blood stopped clotting. I remained in the surgery room for nearly 4 hours as they struggled to stop the bleeding. I lost a large amount of blood and was given a blood transfusion. Hours later, my husband was told I was stable but “not out of the woods.” The following day I was hooked up to a magnesium sulfate drip to stop my seizures. My blood pressure was so high I was unable to see.

Thirty-five hours later, we were told by doctors that I had HELLP Syndrome. I spent the next few days in and out of consciousness.

There is a risk of getting HELLP in future pregnancies.

But I am very grateful that I am still here to watch my babies grow. And, by sharing my story, I hope to help create awareness about this dangerous and potentially deadly pregnancy complication and that it helps save the lives of other expecting mothers and their babies.