How to Adjust from One to Two Kids 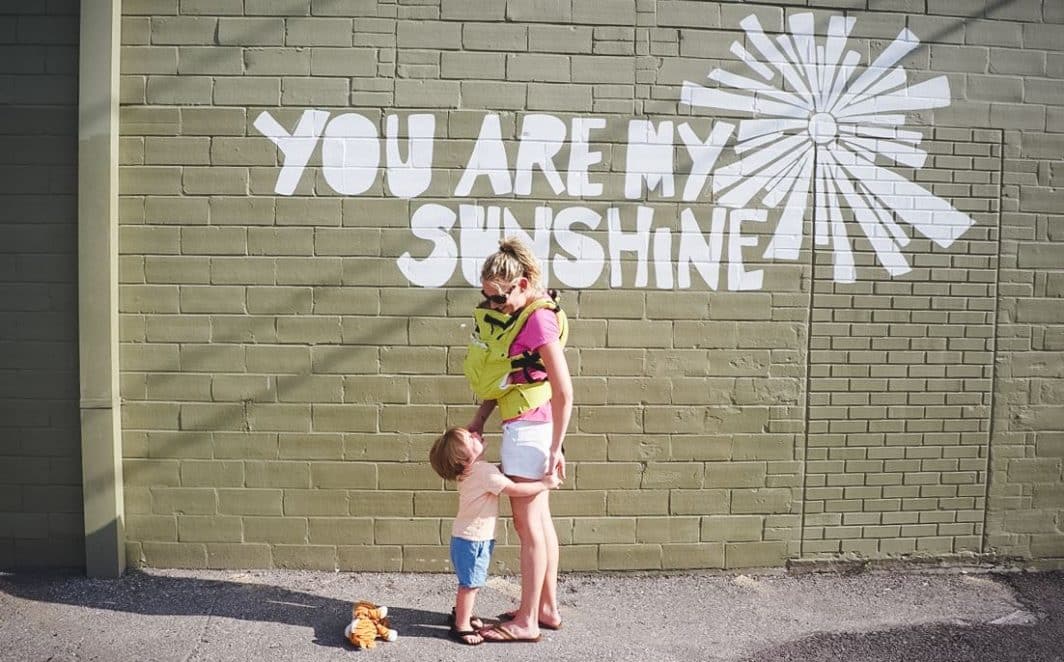 Zero to sixty. That’s how my best friend’s father recently described how it feels to go from having one kid to two kids. Before, life with my first son, Fischer, had settled into a normal routine, a steady 35 MPH speed, if you will. That all changed on April 4th when little Bear made his appearance. The first couple of days may not have felt that different because we were all in a bit of a haze and had A LOT of hands-on deck. However, the shift over the past few months has meant re-prioritizing, re-programming, and has felt like we’re moving at lightning speed. A question I have been asked quite often is, “How are… Read More

Zero to sixty. That’s how my best friend’s father recently described how it feels to go from having one kid to two kids. Before, life with my first son, Fischer, had settled into a normal routine, a steady 35 MPH speed, if you will. That all changed on April 4th when little Bear made his appearance. The first couple of days may not have felt that different because we were all in a bit of a haze and had A LOT of hands-on deck. However, the shift over the past few months has meant re-prioritizing, re-programming, and has felt like we’re moving at lightning speed.

A question I have been asked quite often is, “How are things going? Are you adjusting to two?” The answer is always complicated. Adjusting hasn’t been easy. And how things are going depends on the day (or moment!). Some days I could easily find a million things to complain about. Other days I could just as easily find a million things to swell with pride over. Most days, it’s both.

In the Beginning, It’s Hard!

One realization I’ve come to is how right it all feels. Sure, the days can be long and exhausting. But this little family we’ve created and this time in my life is 100% meant to be. I cannot believe I ever questioned being able to love another tiny human as much as I love Fischer. Bear has completed our family in such a way that I cannot fathom life without him. And I am confident that I’ve given BOTH boys a lifelong best friend. My heart just swells at the sight of them together!

Still, there’s the question that begs a more solid answer: logistically, how do you do it? The easy answer is that it’s all about creating a brand new routine. Take a little bit of what was working and combine it with trial-and-error proofed new strategies. The most interesting part of this whole experience thus far is the realization that I remember next to nothing about raising an infant. And yet I am way more relaxed than I was with Fischer. I guess once you’ve successfully gotten one kid to three-years-old you figure that you surely can do it again. I mean, I must’ve been doing SOME things right…right?

Helpful Tips for Adjusting from One to Two Kids

Now, the more intricate answer to the question mentioned above is that there are a lot of ways to do the same thing. You have to find what works best for you as well as figure out what tools, both tangible and abstract, you need in your hypothetical parenting fanny-pack at all times. Today, I am sharing some of the tools that we’ve begun “collecting” and wielding in the past (VERY SHORT) four months!

Spring for the Double Stroller

If you’ve been hesitant to purchase a double stroller, just go ahead and bite the bullet. Yes, they can be pricey, but there is a great range of strollers on the market to fit any budget. Trust me. You WILL use it. I am a firm believer in the “cost vs. X” theory to decide whether a purchase is worth it or not. I use it for everything from a pair of jeans to toys for my kids to dish towels. Even if your older kiddo is walking and always wants to walk, there will be times when they suddenly don’t want to walk, and you’ll desperately be wishing you’d taken this advice. And so will your significant others’ shoulders/arms/back.

My favorite doubles are the strollers that allow for multiple seating positions, like the new Phil and Ted’s Voyager. This stroller takes baby from newborn, with a bassinet feature (as well as infant car seat adapter), all the way to “big kid” as the seat itself can transition into three different positions. The bassinet has been a lifesaver for days when I want to take walks, or if we’re out and Bear desperately needs a nap! Plus, Fischer can face me or face the world or even face his little brother! After testing out some of the other double options, I’ve also found that the Voyager is the easiest to fold up for storage because I don’t have to remove the second seat, and it is very sturdy! 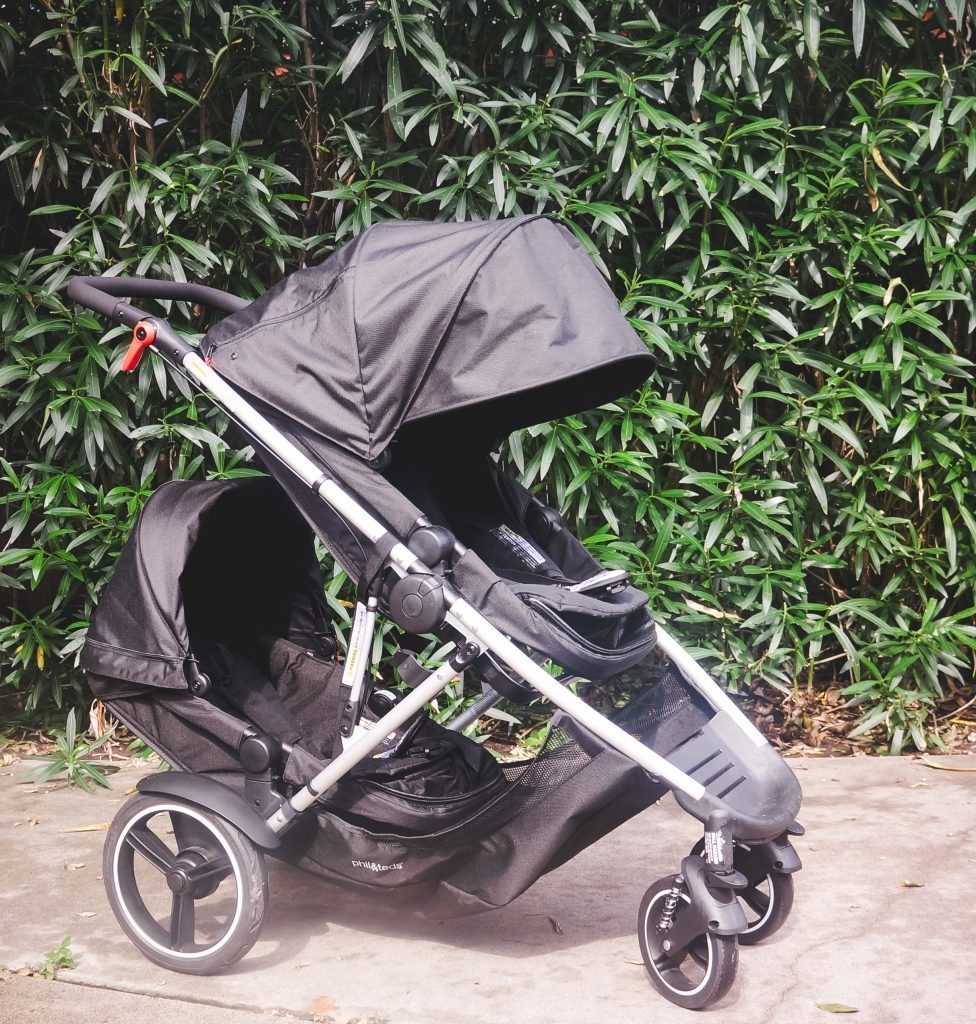 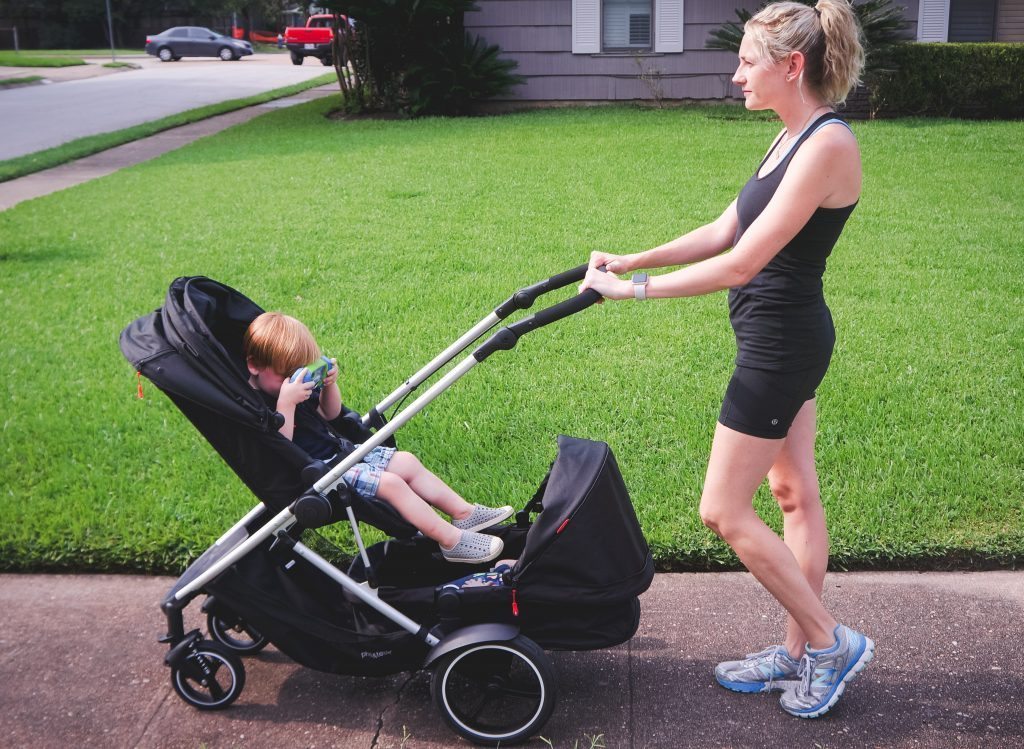 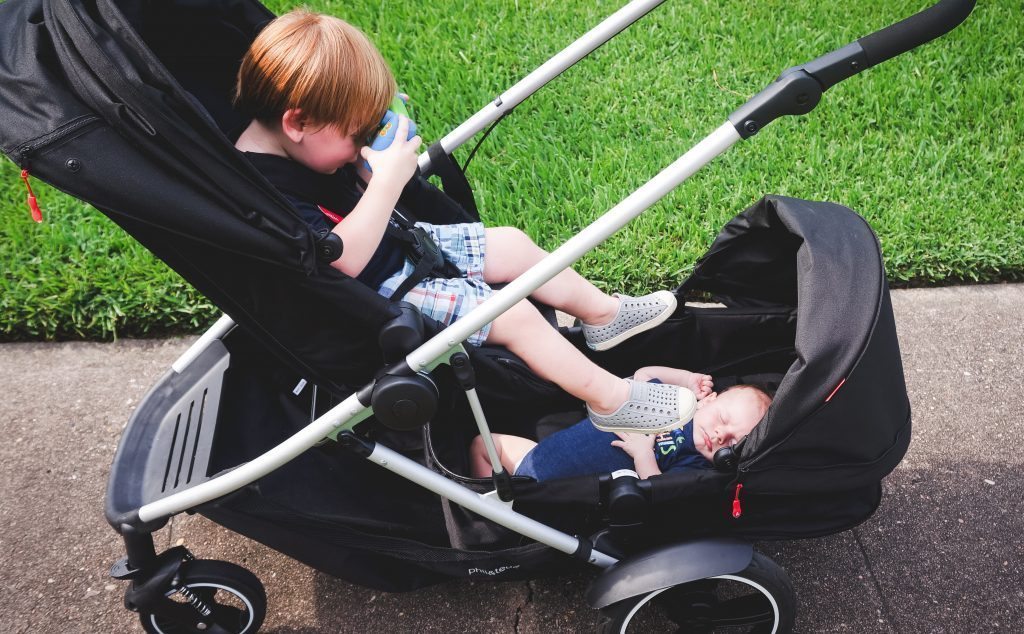 A Baby Carrier Will Save Your Life

The other tool that you’ll need for travel during this period is a baby-carrier. And here’s another area that “cost vs. use” comes in handy. You’ll want to spend a little bit of money on a great carrier; your body will thank you for it.

I’ve used the Lillebaby Complete for everything from walks while exploring vacation destinations, to hanging out with the family at music festivals, or even just while playing baseball with Fischer if Bear doesn’t want to be put down. It’s one of my favorites because it offers such great lumbar support! With so many styles to choose from, like wraps and ring slings, you’ll find something that both you and baby love. 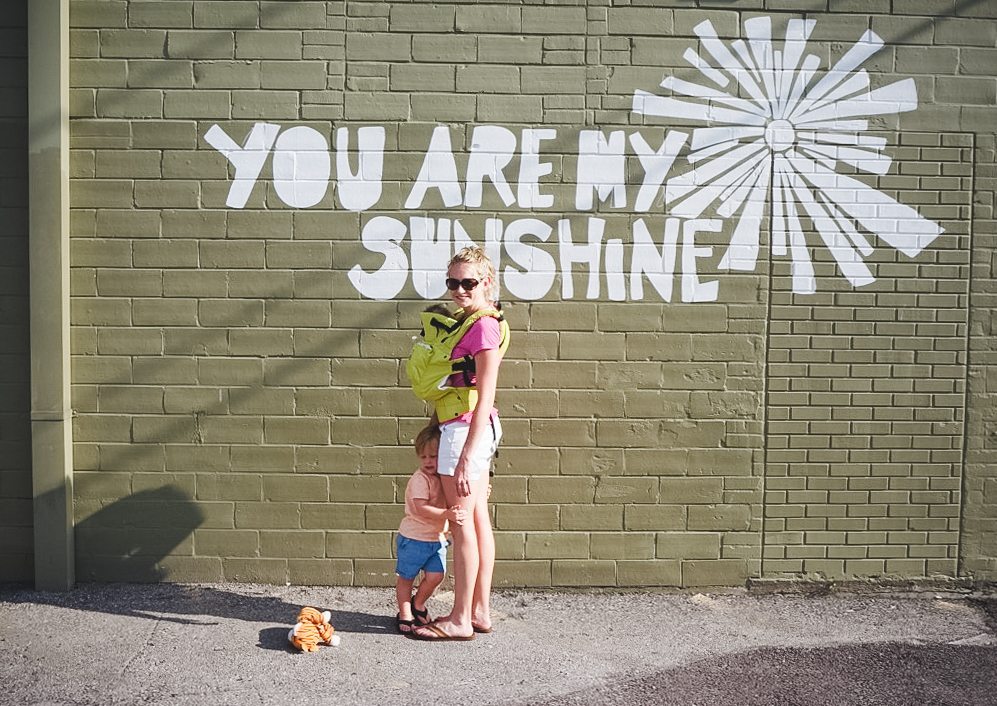 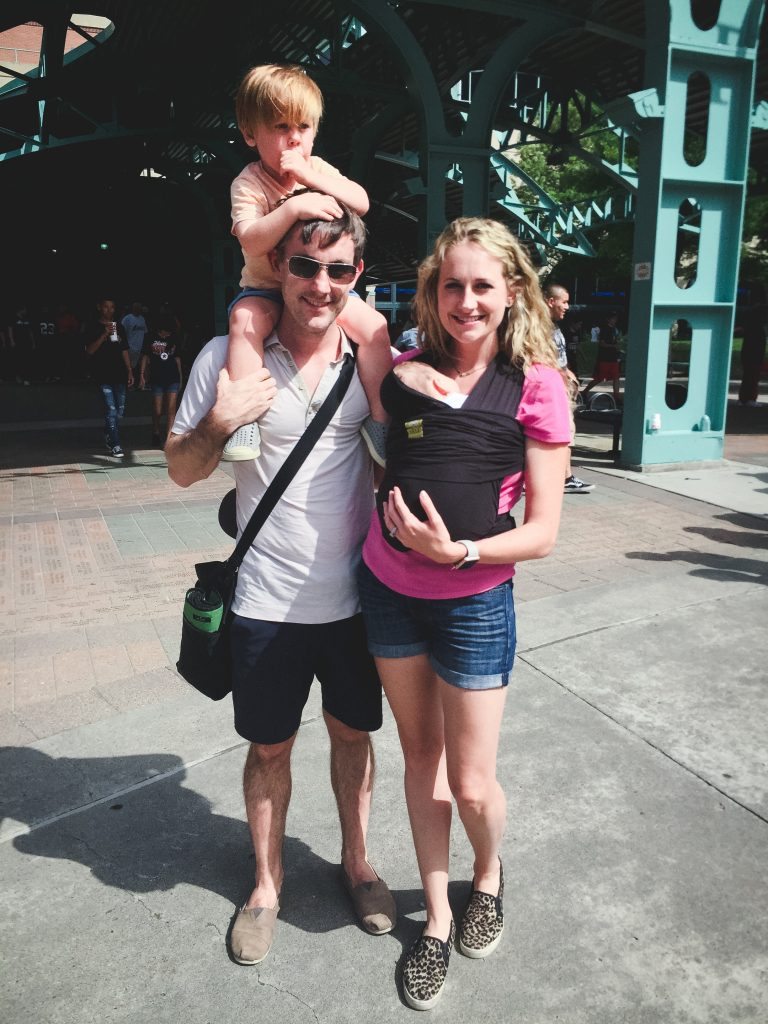 Stations Around the House are Key

Okay, this might sound crazy to some of you, but one item that has seriously made life seem so much easier lately is having a portable changing station. And no, I’m not just referring to my diaper bag! The kids’ rooms are on the opposite side of the house from our playroom, AND we spend a lot of time outdoors. So when Bear needs to be changed, it’s just easier to have a little portable station that goes in between the playroom and outdoors easily, and has everything I need to clean him up! I also don’t have to worry about Fischer getting into anything while I’m gone for a second. You know it only takes them a minute to wreak havoc on your couches/walls.

If you aren’t familiar with Tubby Todd yet, you should be. I LOVE their products for a few reasons. First, I know that I am putting the highest quality ingredients on the boys, and that’s a huge sigh of relief. Second, they smell AMAZING, are conveniently packaged, and are incredibly effective. If Bear is showing any signs of diaper rash, it only takes one application of the All Over Ointment to cure it. No lie. 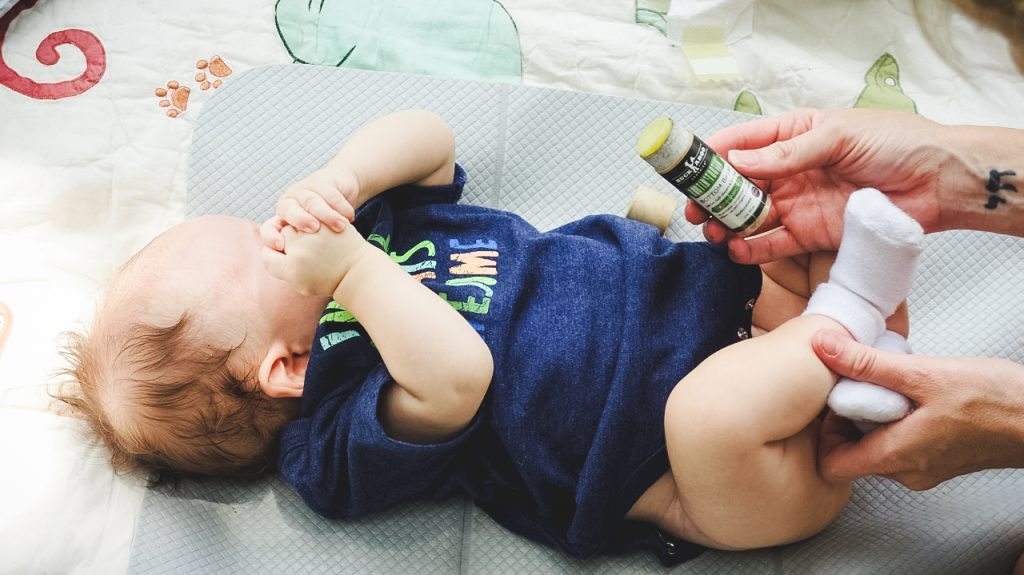 Pick Your Battles with Dinner

Food options are something I struggled with when we first had Fischer. And even though we had a ton of people dropping off food for us this time as well, it’s become such a challenge to find the time to prep meals, get everyone fed, etc. The whole “dinner-bath-bed” routine has gone from taking an hour to 2 or more! Not acceptable. I’ve been whipping out the crockpot way more often lately as well as relying on prepared food options. And while dinner is cooking away in either the crock or the microwave, I dream of cooking regularly again. And hey, sometimes cereal is a great dinner option!

Splurge on Parking and Grocery Delivery

Certain situations call for a little bit of a splurge. I’ve never been one to use valet; I can park my own darn car. But lately, with two in tow, I want our outings to be more quick and efficient. And sometimes valet is the way to go. It can also be a safer option as there seems to be an increase of stories about women with children being targeted while packing up or unloading their cars. Yikes!

I’ve also found myself giving in to the grocery delivery trend because sometimes the very thought of dragging my two kiddos to the grocery store just makes me want to cry. I felt guilty about splurging in these couple areas at first. But I had to get over that and realize that the stress I was avoiding was worth it.

Sometimes, Screen Time is Your Friend

I’ll be the first to admit that I have major “mom-guilt” when it comes to screen time, but this is an area where I’ve really had to let go of the guilt. It’s not going to ruin my child, and sometimes it’s the safest option while I’m busy nursing Bear or tending to his other needs. To provide Fischer with quality screen time, I’ve downloaded educational apps and rely on PBS and ABCMouse.com.

I’ve also found that being super organized is essential to not losing your mind during this transition! It had become really easy to just kind of go with the flow with Fischer as he got older. Now, with both boys, I make sure to get myself organized at night in preparation for the next day. It is all about planning ahead! I’ve also found that getting up just a bit earlier, and getting myself fed and dressed helps immensely. There have been plenty of days where we’ve stayed home simply because I couldn’t get myself ready with all of the demands placed on me once they were awake.

Take a Deep Breath (or Two)

That being said, when it all goes to hell in a handbasket, I try to remind myself that it’s NOT. A. BIG. DEAL. If we don’t make it to a playdate or lunch date on time, or at all, life will go on. Freaking out or stressing isn’t going to help the situation. Instead, it often compounds it. This is where showing myself a bit of grace has played a huge part in this transitional period. Being flexible is very important! 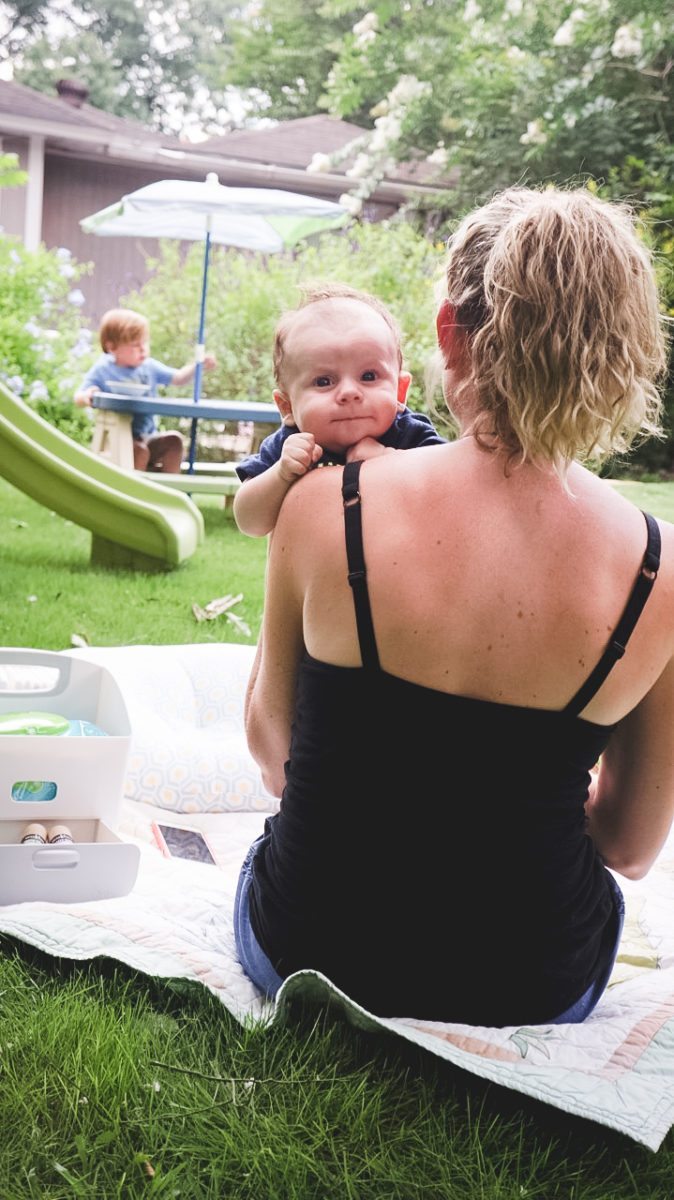 As I said, there are so many ways to do the exact same thing. You have to find what works best for you and your family. I hope that I’ve given you some points to think about as you either prepare for the new addition to your family or if you’re in the thick of it and trying to find solutions. Just remember that this transition doesn’t last long and before you know it, you’ll feel like you’re running a well-oiled machine once again!

What You Should Know About Breast Augmentation Before Baby

The BEST 15 Things to Do for a New Mom

Child Regression: What to Know and What to Look For

To My Second Baby, You Made Me a Better Mom

Gifts to Bring a New Family in the Hospital