The Scoop on Breastfeeding and Alcohol 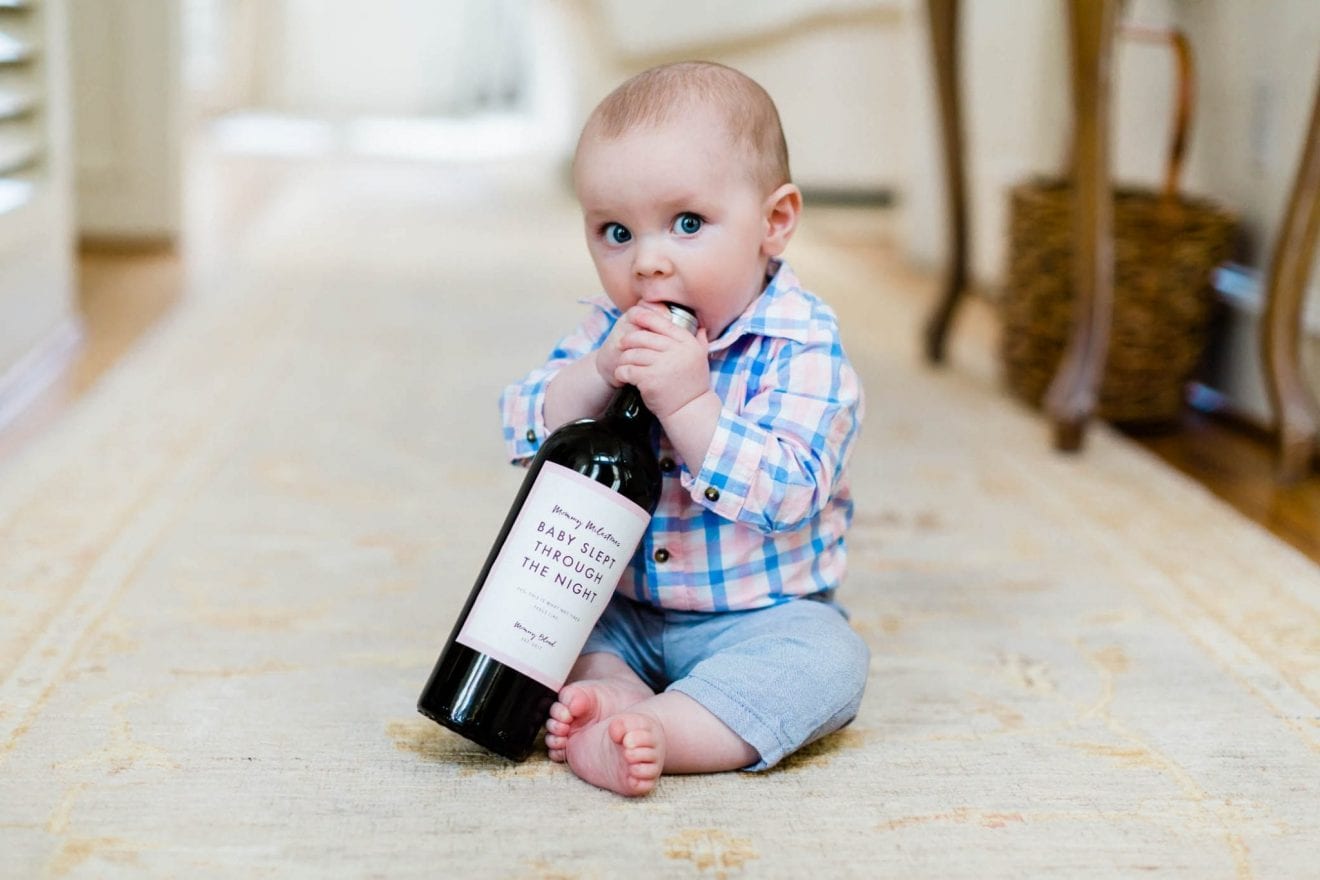 Pregnancy is a long, hard nine months (or more) without a glass of wine or a poolside mimosa in sight. Between the lack of good, restful sleep, and the giant swollen cankles, if ever there were a candidate in need of a cold, stiff drink it would be a pregnant lady. Unfortunately, drinking while pregnant is generally frowned upon, and for good reason. But if you’re anything like me, after giving birth one of the first things you crave is a giant margarita. But what’s the scoop on alcohol and breastfeeding? Does this mean another six to 12 months or more of forced sobriety?… Read More

Pregnancy is a long, hard nine months (or more) without a glass of wine or a poolside mimosa in sight. Between the lack of good, restful sleep, and the giant swollen cankles, if ever there were a candidate in need of a cold, stiff drink it would be a pregnant lady. Unfortunately, drinking while pregnant is generally frowned upon, and for good reason. But if you’re anything like me, after giving birth one of the first things you crave is a giant margarita. But what’s the scoop on alcohol and breastfeeding? Does this mean another six to 12 months or more of forced sobriety? Not necessarily.

There has been a lot of misinformation over the years regarding alcohol and breastfeeding. Here’s what the LLLI, La Leche League International, has to say on the subject (from The Womanly Art of Breastfeeding).

The takeaway? There’s nothing wrong with drinking and breastfeeding in moderation. You just have to be safe (read: smart) about it.

Researchers say that infants younger than three-months-old process alcohol at about half the rate of adults. And studies show it can negatively affect baby’s eating and sleeping habits. During the four hours after a breastfeeding mother consumes an alcoholic beverage, babies who nurse consume about 20% less milk.

While prolactin (a hormone that helps with milk production) does increase with alcohol consumption, oxytocin (a hormone that’s responsible for milk letdown) decreases. According to the American Academy of Pediatrics Committee on Drugs, alcohol consumed in large amounts, listed side effects include: drowsiness, deep sleep, weakness, abnormal weight gain in the infant, and the possibility of decreased milk ejection reflex in the mother. Some studies show that alcohol in breastmilk may hinder baby’s development — some experts recommend breastfeeding moms avoid drinking alcohol entirely until baby is at least three months old.

“Alcohol passes freely into mother’s milk and has been found to peak 30 to 60 minutes after consumption, 60 to 90 minutes when taken with food. Alcohol also freely passes out of a mother’s milk and her system. It takes a 120 pound woman about two to three hours to eliminate from her body the alcohol in one serving of beer or wine…the more alcohol that is consumed, the longer it takes for it to be eliminated. It takes up to 13 hours for a 120 pound woman to eliminate the alcohol from one high-alcohol drink.” (from La Leche League’s The Breastfeeding Answer Book)

You should always wait at least two hours after finishing a drink before nursing your child.

This should give your body time to (hopefully) clear the alcohol. Of course this varies from person to person. It’s probably best to have a drink (if you choose to imbibe) right after feeding, or during one of baby’s longer sleep stretches. Or you can always pump and store your milk before drinking, then feed your baby the expressed milk from a bottle (giving your body more time to completely clear the booze). You could also feed your baby formula. Don’t forget to stay hydrated (with water we mean)! Eating before drinking will also help to absorb the alcohol.

If you do choose to pump and store your breastmilk to enjoy a glass or two of wine (or whatever adult beverage you prefer), we recommend using Milkies Milk Trays. They are designed specifically for expressed milk. 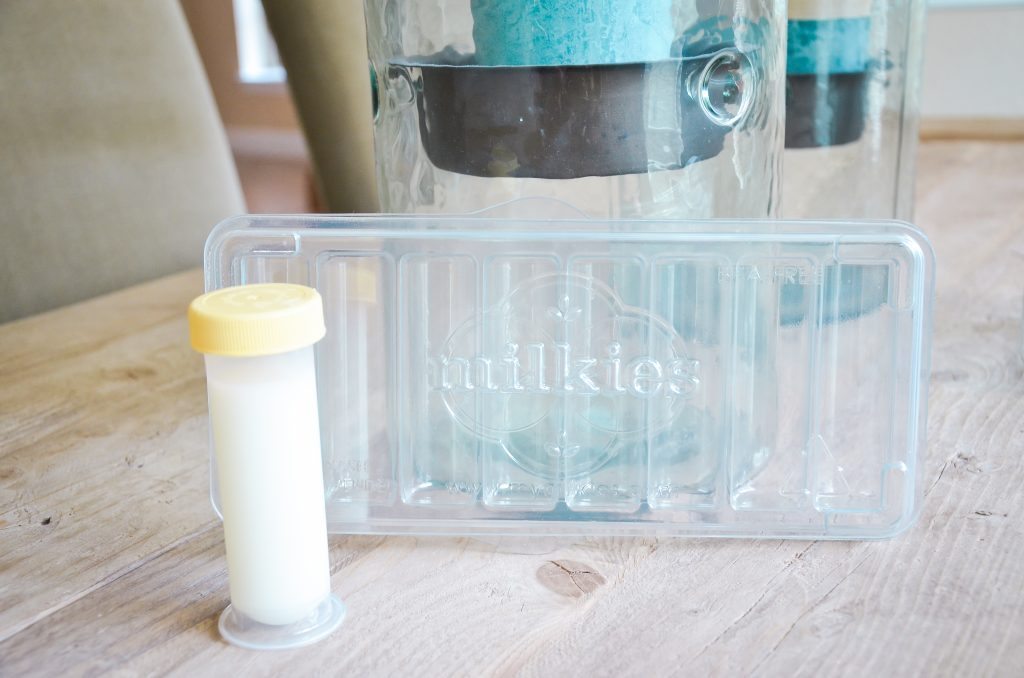 Milk Trays are made from PET Plastic — this means they are made of a food-safe plastic that contains no BPA, phthalates, or dyes. Milk Trays allow you to freeze and store your milk in one ounce “Milk Sticks” that fit through any bottle opening. This allows you to thaw the perfect amount of milk for a feeding, so that you don’t waste a drop of your liquid gold. They are also reusable! Which is good for the environment, and your wallet.

I LOVE my Milkies Milk Trays. They are way more user friendly than plastic bags (you don’t have to worry about leakage), and much safer than a regular ice tray (most of these are not BPA free — you don’t want to leach chemicals into baby’s milk.) 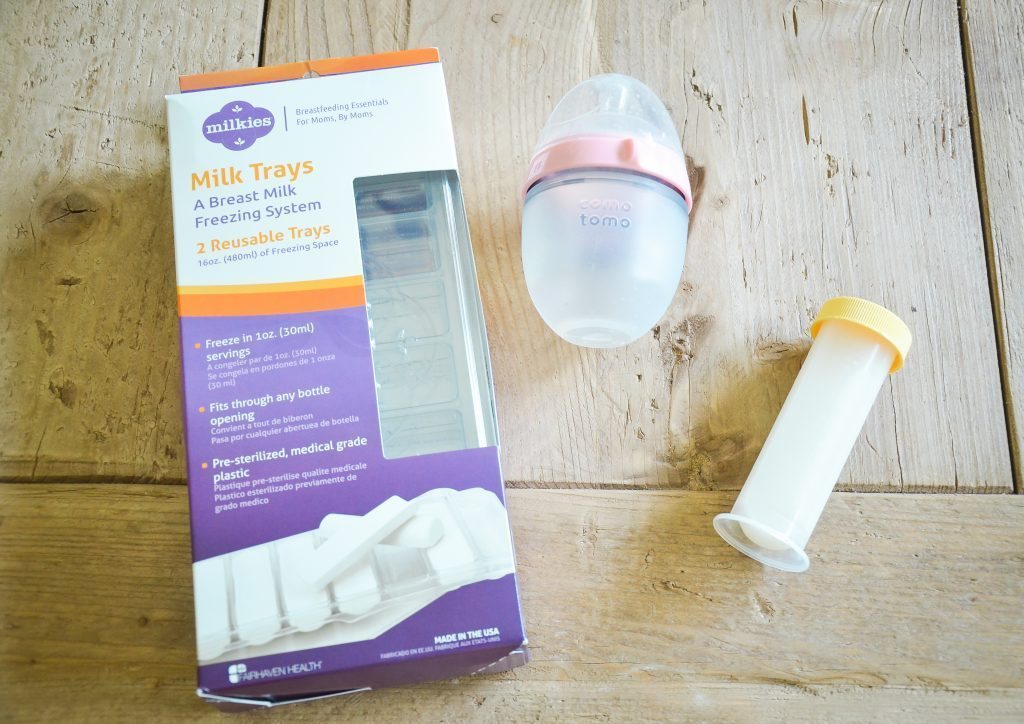 Having more than one drink at a time can prove challenging for a breastfeeding mom.

It can be difficult to determine when your body has cleared the booze — the more you drink, the longer it takes. Your best bet? Limit yourself to one alcoholic drink per day. And if you have too much to drink and become intoxicated, DO NOT breastfeed your baby until you are sober. If you have to, pump and dump the expressed milk. Liquid gold? Not if it’s tainted. Not worth the risk. Trust us on this one. Remember, you can’t safely care for your baby if you’re drunk. (Duh.) And co-sleeping after drinking isn’t a good idea. And definitely is not if you are feeling tipsy or drunk. If you’re going to drink, keep baby out of your bed. It’s just that simple.

Motherhood is hard. We all deserve a break every now and then. We just have to be careful and thoughtful about our actions. Parenting is a full-time job. Turn your back for just one second, and disaster can strike. It’s best not to even put ourselves in a position  that could cause harm. Am I right? So here’s to babies, breastfeeding, and (safely) celebrating all of life’s momentous occasions!

What to Do (and NOT Do) When Visiting a New Baby

How to Help a NICU Mom and Show That You Care

Clogged Milk Ducts: What You Need to Know

What Your Body Really Needs During Pregnancy & Postpartum: Tips from a Registered Dietician – Podcast Ep 37

Gifts to Bring a New Family in the Hospital