What Color Eyes Will Your Baby Have? - Baby Chick

Expecting parents often wonder what their baby will look like once he’s born. Will he have light or dark hair? Will he inherit your freckles? What color eyes will your baby have? When I was pregnant with my son, my husband and I had fun wondering these same things. Would he have a round face? Would he have my nose? My husband’s cheeks? The only thing we knew for sure was that he would have deep brown eyes and dark brown hair, just like his mom and dad. Or so we thought.

When our son was born, he looked like a perfect combination of us, except his eyes were blue! We asked our doctor what was going on. He told us that many babies’ eyes begin with a lighter hue that eventually changes color as melanocytes (cells in the iris) begin to produce melanin. A baby’s eyes typically darken slightly, but brown eyes do not lighten. A baby’s eye color will most likely set by about six months old, though subtle eye color changes can happen throughout toddlerhood.

But when we looked into our little boy’s eyes, we saw deep, beautiful pools of a shade of light blue like a clear summer sky. No, they were definitely blue. We had a feeling six months would come and go, and we’d be looking at those gorgeous baby blues forever.

In the 1st grade, our scientifically-curious son wanted to participate in the school science fair. He wanted to explore why he has blue eyes when his parents have brown eyes. After helping our little scientist do some online research, he came up with a hypothesis. He determined that he has blue eyes because he got two blue-eyed traits—one from mom and one from dad. So, even though we both have brown eyes, someone in both of our families with blue eyes passed down the “blue-eyed” gene in their DNA.

The science of eye color can run deep in the family.

And you know what? He was right. Scientists consider brown (and sometimes green) dominant traits, while blue and hazel are considered recessive traits. There’s a 25% chance that a baby will have blue eyes even if both parents have brown eyes. So if a baby does have blue eyes from two brown-eyed parents, it’s because each parent possesses a recessive blue-eye gene.

If only one parent has a recessive blue-eye gene, the chances of a baby having blue eyes are closer to 1%. Furthermore, according to HealthyChildren.org, “Two blue-eyed parents are very likely to have a blue-eyed child, but it won’t happen every single time.” However, if one parent has one color of eyes— blue, brown, green, hazel— and the other has a different shade of eyes, it’s a straight 50/50 shot that the baby will have one of those two eye colors. What’s more, researchers believe blue-eyed babies to be related to a single ancestor who experienced a genetic eye mutation during the Neolithic period (Stone Age).

So, how can parents predict their baby’s eye color? While it’s difficult to know precisely, baby eye color calculators (try one here) can help prospective parents narrow down the possibilities. Genetic calculators (try one here) ask simple questions, including the color of both parents’ eyes, grandparents’ eyes, and so on. Of course, there’s no way of knowing which DNA will push its way through to eye color, but it’s fun to wonder! 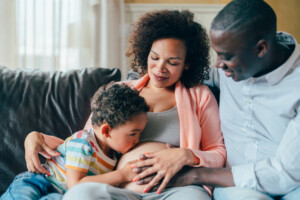 10 Thoughts Every Mother Has When Expecting Their Second Child 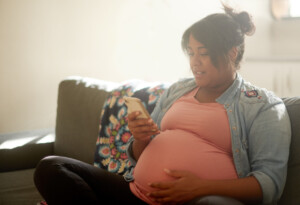