Life with an almost three-year-old is fun. It’s also a little maddening. I have come to the (should have been obvious) conclusion that just because my three-year-old can walk and talk and is starting to learn to dress herself (albeit questionably) and show genuine interest in the “big kid potty” — doesn’t mean she understands anything I try to (logically) explain to her in my inside voice. Our days are currently filled with about a million mini meltdowns — embarrassingly, for both toddler AND mom.

Here are just a few reasons my toddler lost her sh*t today.

2. She didn’t want to wear tennis shoes to school. She wanted to wear her gold sandals AGAIN. Duh, mom. Even though the temperatures (finally) dipped below 70 degrees — so obviously fall weather.

3. Because I suck at brushing hair. Apparently.

4. I put a bow with her ponytail. Not going to happen.

6. Because we needed to leave to get to school on time

7. She insisted she needed to use the bathroom (she isn’t even potty trained) before we could leave the house, and I said no.

9. I required her to be buckled into the car seat.

11. She didn’t like me singing along with the radio because every song “is her song.”

12. Because I wouldn’t roll down her window in the car (It was raining.)

13. When I asked her to get out of the car once we arrived at school. I had to crawl back into the SUV and drag her out, kicking and screaming as all the other preschool parents looked on — some understanding, some disapproving. Not embarrassing AT ALL.

14. When she refused to hold my hand in the parking lot. She then proceeded to make me chase her down (with an infant and a four-year-old in tow). I hollered, “When I catch you, you’re in big trouble!” Again with the disapproving looks.

15. We had to first drop her big sister off at her classroom. Not acceptable. (Usually, it’s a fight about who will unpack big sister’s backpack. Every dam* day.)

16. Because she tripped over one unsuspecting kid or ran into a wall as she was running the whole way to her classroom. I walk briskly behind her with a “guys, I give up” look on my face.

17. When I told her we don’t need to make a pit stop in the front office.

18. I told her we didn’t have time to say hello to every fish in the hallway fish tank.

19. When I picked her up from MDO, I wouldn’t bring her nap mat home. I explained that I washed it over the weekend, and it was only Monday. This explanation does not suffice.

20. Because she has to sit in her car seat…again.

21. Because there is a “no food in the new car” rule (except for true emergencies). Why can she not eat her leftover snack?

22. When I tell her that I don’t want the entire house “redecorated.” No, I don’t want all the trash taken out of the trash can. Nope, I don’t need help folding the laundry. Sorry boo, the food in the pantry needs to stay put. Hashtag, all the screaming

24. When I explained that I would not be reading 25 books before bedtime

25. When we turned out the lights in her room and left because we didn’t give her a 12th hug and kiss goodnight

I could lie and say I always handle the three-year-old tantrums with ease and grace, but that’s just not the case. When an outburst begins, I take a deep breath and try to get my toddler’s attention in a calm and calculated manner. BUT when all else fails, like any other exasperated mom with three little ones, I turn to yelling and threatening punishment. Once I’ve calmed down, I always apologize (for the yelling) and attempt another reasonable conversation with my almost-three-year-old about her behavior. I’m not perfect, but I try.

I have a short fuse; this is something I am working to improve — and I am not above rewarding myself for a mothering job well done. Sometimes I even allow myself a participation award, a “well, it could have been worse” glass of wine. After all, toddlers and their grownup counterparts aren’t all that dissimilar, and a little positive reinforcement goes a long way. 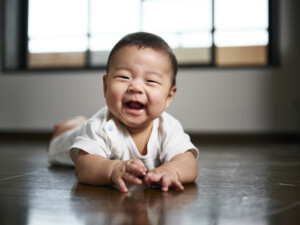 How to Raise a Happy Baby 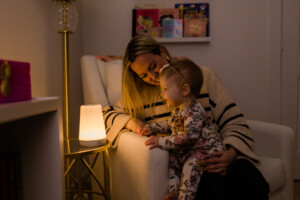