6 Surprising Benefits of Being an Older Mom - Baby Chick

6 Surprising Benefits of Being an Older Mom

Just a few short generations ago, women were getting married at age 18. And they didn’t wait long to get pregnant. By age 25, they easily could have had a few children. By 35, their children would have been in middle school. But in 2021, that reality seems less common. Girls are increasingly being raised with a mentality to focus on a career of their own and personal independence. This means the population of first-time moms over the age of 30 is growing by the day.

From 1970 to 2006, the birth rate for mothers ages 35-39—considered mothers of advanced maternal age—increased from 1% to 14.2%, according to the CDC. Historically, mothers of advanced maternal age have been discussed regarding their increased health risks during pregnancy. But it turns out that babies born to “older moms” also have many wonderful advantages. These benefits are rarely focused on. Here are just a few of them!

A study on children born to older moms in Germany had some surprisingly positive outcomes. This study found that kids born to older mothers tend to do better on standardized tests and are less likely to quit school. Additionally, he found that the older a mother is, the taller her children are. This is a trait many people find favorable! Further, analysis of data from the Long Life Family Study (LLFS) found that women who have children after age 33 are twice as likely to live to be 95 or older!

2. You have a no regret mentality.

When you have a child in your twenties, you are essentially each working to get established in the world. As your children grow, you, too, are growing as you work to develop in your education and career. Although the partying days of college may still sound appealing, you quickly learn that the drawbacks of staying up late with friends outweigh the benefits of staying in. So you mature quickly. However, an older mom has the advantage of having already had the chance to have experiences in life that represent all things related to the freedom of a kid-free life. And because older parents have had their years of freedom, they may feel more fulfilled in abstaining from activities that are harder to do once you have children in tow (like traveling or evening social engagements).

3. You have more flexibility in your career.

One of the best benefits of waiting until later in life to have children is that you have had a chance to become more advanced in your career. And with advancement comes two major benefits: increased financial security and job flexibility. When you are in your twenties, you are likely the low woman on the totem pole at work. So asking for extra time off is scary and sometimes unrealistic. When you’ve held your job longer, you’ve often earned the right and respect to ask for what you need. And you’ll probably actually receive it. Additionally, kids are expensive! Having had time to save money can help ease some of the financial stress that comes with starting a family.

4. Nothing is taken for granted.

My sister had her first child just a few months shy of turning 34. That was eight years after I had my first son at age 23. And while I was absolutely smitten with my sons from the moment I held them, I also never had a time when I didn’t think I would have children, as my sister had. She seemed to have a healthier perspective on the ups and downs of life with a newborn. When she had trouble getting him to eat the first few months, she never complained about her rigorous feeding and pumping routine because she kept saying how happy she was just to have a son! It was like she genuinely savored every moment, and it was precious. Here is a comparison photo of the two of us pregnant just for fun. 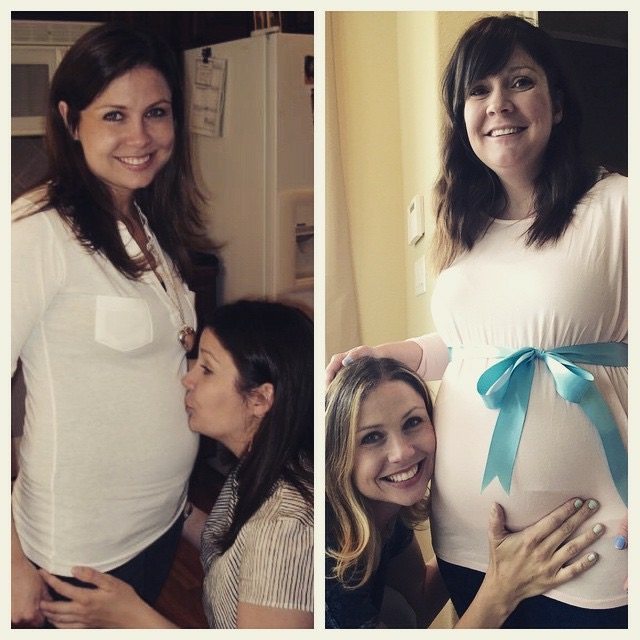 5. Your friends are more flexible because their children are older.

When all of your friends have young children, you all tend to be at the same stressful stage that comes with having adorable yet irrational toddlers! Y’all want to help each other, but no one has the freedom to be quite as helpful as she desires to be. “Sure, I can help pick up your kids. Errrr, let me just move four car seats so I can find room to put in your child’s car seat . . . ” It’s just not as easy as it sounds.

However, when you are the older mom, your friends often have children well out of the baby phase, and they miss those little baby snuggles! This means that you probably have friends and family that are more willing to offer their help. And this should not be looked over as an insignificant benefit! It takes a village to raise a child. And the population of your village is double what it would have been ten years earlier!

6. You stay younger at heart.

I’ll never forget the day I sat down in a kindergarten meeting for one of my sons and looked around and felt I was the oldest mom in the room! It was a surreal feeling. But it was also one that enlightened me to the experience of older parents. You stay connected to a more youthful crowd. Instead of guilty by association, you are young at heart by association! So while you may gain a few gray hairs on your head, you are also staying abreast of the latest pop star and fashion trends. You’re not only older and wiser but cooler. And what isn’t super fun about that?

My Child Might Be Wild, But I’m Doing My Best

What to Pack When Sending Your Child to Daycare