What is Montessori and Why it Might Work for Your Child

Do you have a dream preschool in mind for your baby?

I won’t lie: I didn’t give preschool much thought until my baby was two years old. In some instances, kids are put on school waiting lists before they turn one. There’s nothing wrong with having priorities, but we just focused on taking baby steps through babyhood.

Then, I happened to do a random Google search on Maria Montessori’s 100th birthday. In its infinite wisdom, Google clued me in on who Montessori was and the teaching methods she pioneered. A few curious searches later, I had my heart set on a Montessori education for my son.

The Montessori methodology was developed by a female physician from Italy named Maria Montessori. In the early 20th century, she had to fight for her spot at the “man’s table,” so to speak, since a woman doctor was unheard of and even unappealing in those days.

She was assigned to care for a cluster of unwanted, poor children in an impoverished district. Those kids were deemed hopeless cases that could never pass Italy’s version of standardized tests, which determined their capabilities.

Montessori proved them wrong. Not only did she teach those children basic skills in self-care, but she taught them academics. In the meantime, she developed a philosophy that blossomed into an alternative curriculum for kids worldwide.

Montessori was built around a couple of simple phrases: “freedom within limits” and “teach me to do it myself.” The good doctor found that kids learned better when their lessons were hands-on. She discovered that kids thrive when they can be independent when they learn according to their interests and when adults are confident in their ability to do something on their own.

When I first toured a Montessori school, I immediately knew that it was like no other preschool I’d seen before. Most other schools have rows of desks and chairs or a chaotic-looking mishmash of rugs, toys, and tables.

This classroom had rugs, toys, and tables too, but it was all methodically organized. The environment was prepared to a T. Everything in the room was at kid-level, including the sinks and snack tables. Shelves lined with special sets of materials bordered the room while kids sat at small tables or on little area rugs in the middle. 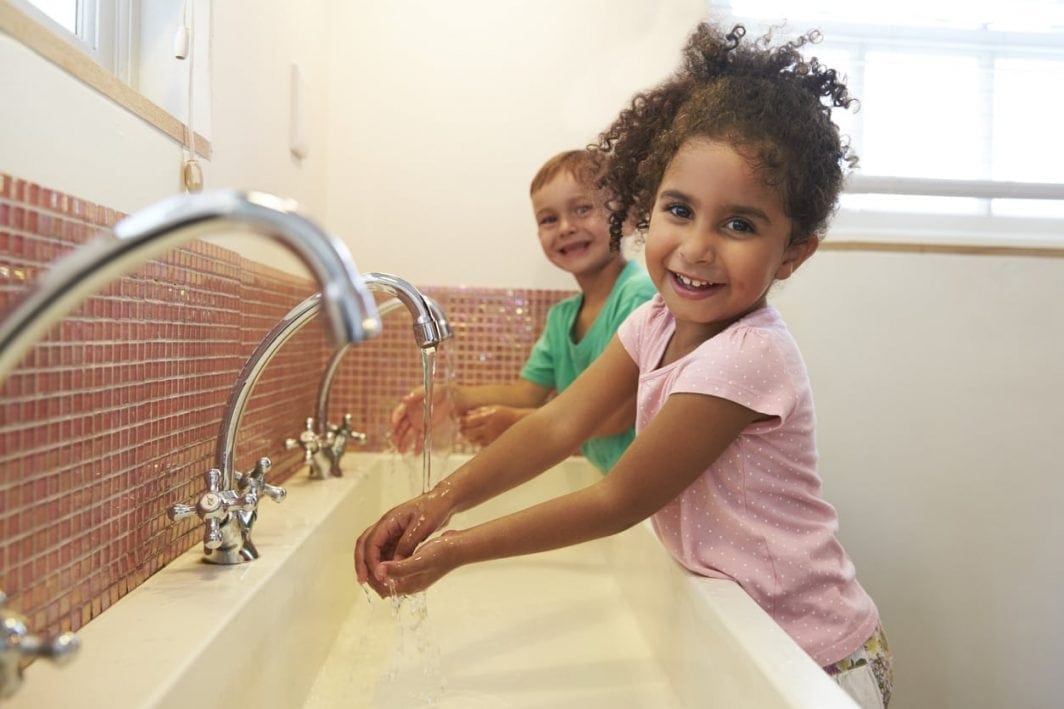 The kids were alone or in small groups of two or three, and they were all so absorbed in their activities that they barely blinked an eye when I snuck in. Two teachers drifted from kid to kid or observed the class from a corner. Each kid was attended to, but they were all given room to explore their environment and finish their work. I was entranced. How could kids look so content and be so calm at this age?

What stands out for me most about Montessori is that it’s a multi-age curriculum. Kids stay with the same teacher “guide” for three years at a time.

So if your child starts at a primary Montessori level, they enter at about age three and stay in the same classroom till they’re six. Then, they move up to lower elementary for three more years, and so on. The curriculum ends at about eighth grade, though most kids only attend Montessori through the primary level.

The curriculum approaches learning at a holistic level. Kids don’t just learn how to memorize math facts from a book or read from memory. The academic concepts are reinforced through hands-on, tangible objects. While kids in traditional schools learn through theory, Montessori kids learn by using all of their senses.

The emphasis is on a well-kept environment and beautiful materials. This motivates kids to learn; they want to be there.

What’s more, the curriculum incorporates basic self-care skills. Anything from food prep to the cleanup is fair game. A common “work” for a three-year-old is a pouring activity, where a child refines their motor skills by learning how to pour solids and liquids.

Montessori meets your child on their level. This helps kids work ahead in various subjects while allowing for help without strings attached in the areas they struggle with. Mostly, kids don’t realize that they’re learning because their work interests them. Fun at school? Who would’ve thought! 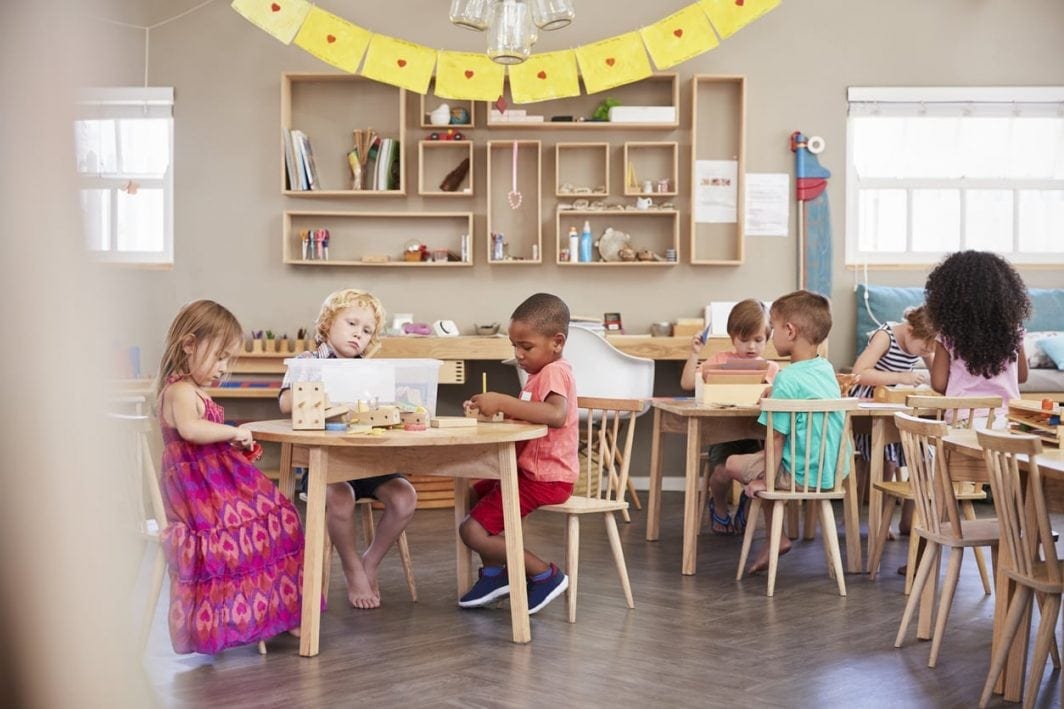 The Montessori materials are very similar in each classroom. They’re used in different ways at each level, though.

For instance, In the primary classroom, a child learns how to stack the pink tower. Without knowing, they learn about weight distribution and balance. In upper elementary, the child is reintroduced to the pink tower to learn a concept in geometry.

The idea is that kids learn the underlying concepts of math and reading at an early age. Then, the concepts are reinforced in higher grades. This way, they’re already familiar with what they’re learning when their brains are mature enough to grasp the lessons.

What Values Does Montessori Instill?

I hoped my son would learn some real-world values at school rather than just academics. Of course, it’s my job as a parent to instill values in him, but he’s an only child. Such things as getting along well with peers, teaching other kids, and balancing an individual versus a group setting can be challenging. Montessori caught my attention because it offers these real-world values.

Since practical life is built into the curriculum as a subject, kids learn to enjoy cleaning up after themselves. They’re guided to learn responsibility for the materials they use. They’re encouraged to do things independently. Learn the Montessori way of potty training here.

Montessori is multi-age for a reason. Kids are taught to help each other. The older kids learn leadership by helping the younger ones, and they reinforce their knowledge by teaching. If a six-year-old helps a three-year-old with a project, he gets to be a leader. He also has the benefit of understanding the project from a teacher’s point of view.

Kids in a Montessori setting are encouraged to embrace peace. From a young age, they understand that one size does not fit all. They are shown that differences are what makes the world so interesting.

If two children are experiencing a conflict, the adults don’t step in right away. They monitor the situation and encourage the kids to express themselves verbally. If they have trouble resolving the conflict, the guide invites them to the “peace table,” where she mediates a verbal resolution. This way, kids learn empathy and the value of getting along.

When I discovered Montessori, I wondered: why isn’t this mainstream. Why can’t all kids learn this way?

Over the years, Montessori schools gained the reputation of elite institutions. In other words, not for the average family. So yes, most private Montessori’s come with a hefty price tag: $10,000 or more in annual tuition.

If you’re anything like me, though, you can’t pony up that kind of cash and manage to eat three square meals a day. That’s where public and charter Montessori come into play. My son is lucky enough to attend one of four public Montessori schools in our state. Most states have at least one. Check if there’s a public Montessori in your area. 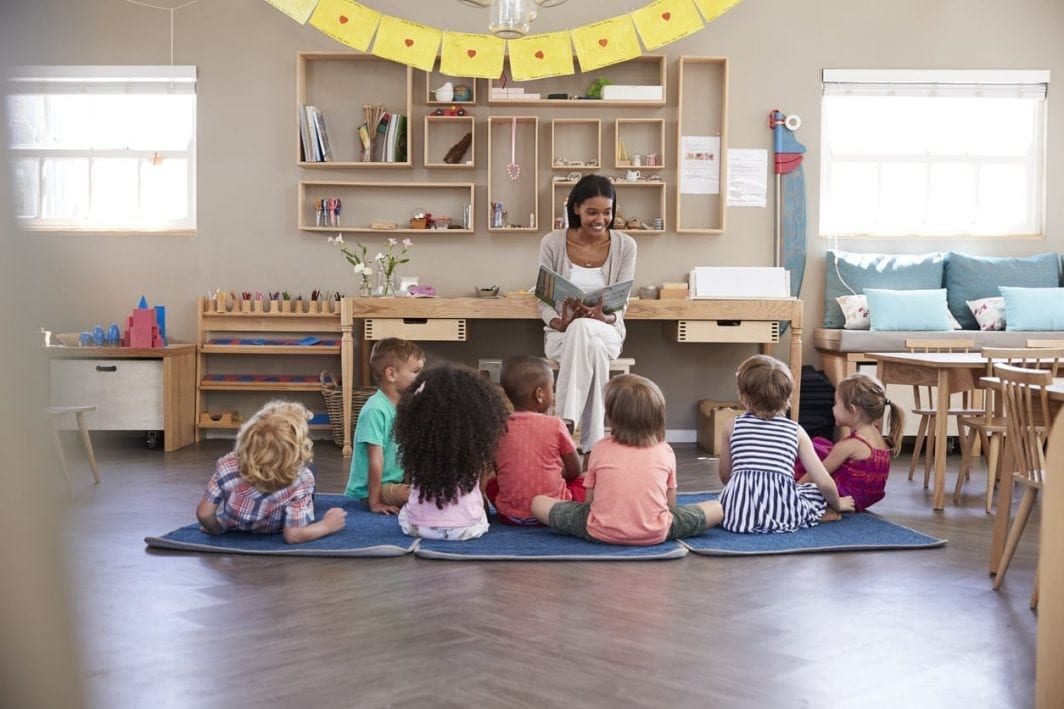 What Montessori Taught Me About Parenting

Since respecting the child is a significant part of Montessori philosophy, I learned quite a bit from it. Montessori helped me think of parenting in a new light. I learned to regard my child as a whole person, not just a kid.

This kind of self-structured discovery meant a lot to me as a parent. Traditionally, we do everything for our little ones to take care of them. What if we can step back and guide them to learn partially on their own? What if instead of zipping up a toddler’s coat each time, we show them how it’s done and encourage them to try next time?

I’m not a helicopter mom nor a hands-off mom. I hover somewhere in the middle, and Montessori helped me maintain this balance. I don’t have to do everything for my child. Instead, I can show him how to do it. He can grow up with the foundation of independence, confidence, and responsibility while providing a safe environment for him to explore and discover.

Above all, Montessori made me face the challenge of modeling for my child. So often, we set different rules for adults and kids. Then, we expect kids to follow those rules set for them by us while we do something entirely different. Ultimately, we wonder why the kids don’t follow our rules.

In Montessori, “because I said so” isn’t good enough. The guides model the behavior they expect from their students, and parents are encouraged to try the same at home. This way, kids learn through observation rather than by force.

I’ll admit, forcing myself to follow the rule of dinner before dessert is a challenge sometimes, but I stick to it since I want my kid to do the same. I’ve also learned to speak more calmly to my son since I don’t want to enforce that yelling is okay.

If you’re interested in non-traditional education for your child, Montessori is your best bet. This is especially true if you want more than academics from your school.

If the one-size-fits-all approach to learning makes you feel bored and hopeless, and you don’t relish the idea of your child sitting at attention in the same place all day, look further into Montessori. You’ll have the opportunity to grow with your child, and if you don’t mind that either, then you’re the perfect candidate for this style of education.