Why do Newborn Babies Startle? The Moro Reflex - Baby Chick

Why do Newborn Babies Startle? The Moro Reflex

Reflexes sometimes called “primitive reflexes” or “newborn reflexes,” are actions that originate in the baby’s central nervous system, which is their brain and spinal cord. When the baby feels a particular sensation or stimuli, a motor reaction occurs. As babies grow and develop and the frontal lobe of the baby’s brain matures, these reflexes go away or integrate, and purposeful actions take over.

A perfect example of this is the palmar grasp reflex. When a baby feels pressure in the palm of her hand from your finger, her palmar grasp reflex kicks in, and she automatically closes her hand around your finger. This is an adorable reflex as it appears that she is holding your finger, but really the reflex just kicked in, and she can’t not hold your finger. As this reflex begins to integrate, she can purposefully release items, such as a rattle. This allows her to put a toy down and reach for another one, put food into her mouth, hand you a toy, or pass a toy from one hand to the other. If the reflex does not integrate, it will begin to interfere with her function as she will never be able to let go of something purposefully.

Another very common, well-known reflex is the Moro reflex, also called the startle reflex. I’m sure all parents are familiar with this reflex. This one is not as cute as the palmar grasp, as it can sometimes alarm parents. It can be unnerving to see your baby jump and appear to be scared. The reflex often makes parents feel bad if they are the cause of the reflex. But parents can rest assured that the Moro reflex is an important part of normal development. The presence of this reflex before three to four months of age indicates a healthy neurological system.

The Moro reflex looks like the baby quickly extends their arms away from their body, then pulls them back in toward their body, curling their hands inward. The baby may also extend their legs.

Several things can stimulate the Moro reflex. Motorically, it can be stimulated by dropping the baby’s head back slightly or any sudden movement to the baby. Such as holding the baby under her back and then quickly dropping your hands a few inches so she is quickly lowered. When the baby feels like he is falling, the reflex kicks in. The Moro reflex is also stimulated by a loud sound or a bright flash of light. You may notice your baby startle when you turn on the light.

Other, less overt triggers can cause your baby to startle. Internal stimuli, such as a little belly gurgle or the movement of gas, can cause the Moro reflex to kick in. Your baby may even startle in response to her own cry. Sometimes we don’t know what causes it. You may not see a movement, hear a noise, or see a bright light, and it can be alarming to see your baby startle for seemingly no reason at all, but it might be something only your baby can feel. It is also important to know that some babies are just more sensitive and will startle quicker and more often than others.

Researchers believe the Moro reflex originally existed to help babies grasp their mothers if they begin to fall.

Try not to feel bad if you inadvertently sneak up on your little one and make him jump. It is a perfectly normal and common reaction. Sometimes when babies have a hyper reaction to the Moro reflex, it can interfere with their sleep if they are constantly startling themselves awake. You can help by swaddling your baby tightly in a blanket, so their limbs are contained. This lessens the Moro reflex. You can also hold your baby close to you, so you physically inhibit the startle reflex a little bit. 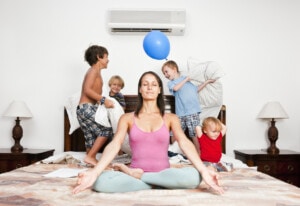