Leak-Proof Diapers that are Natural and Disposable? YES Please!

Leak-Proof Diapers that are Natural and Disposable? YES Please!

When I got pregnant with my first baby, I was willing to try all the “crunchy” things: unmedicated labor and delivery, exclusive breastfeeding, pureeing my own baby food, natural remedies with essential oils, even cloth diapering.

My husband was okay with all of it. Except that last one – cloth diapering. That was a big fat “nope” from him. And if he wasn’t going to do it with me, why try to do it alone? So I gave in and agreed to use regular disposable diapers. 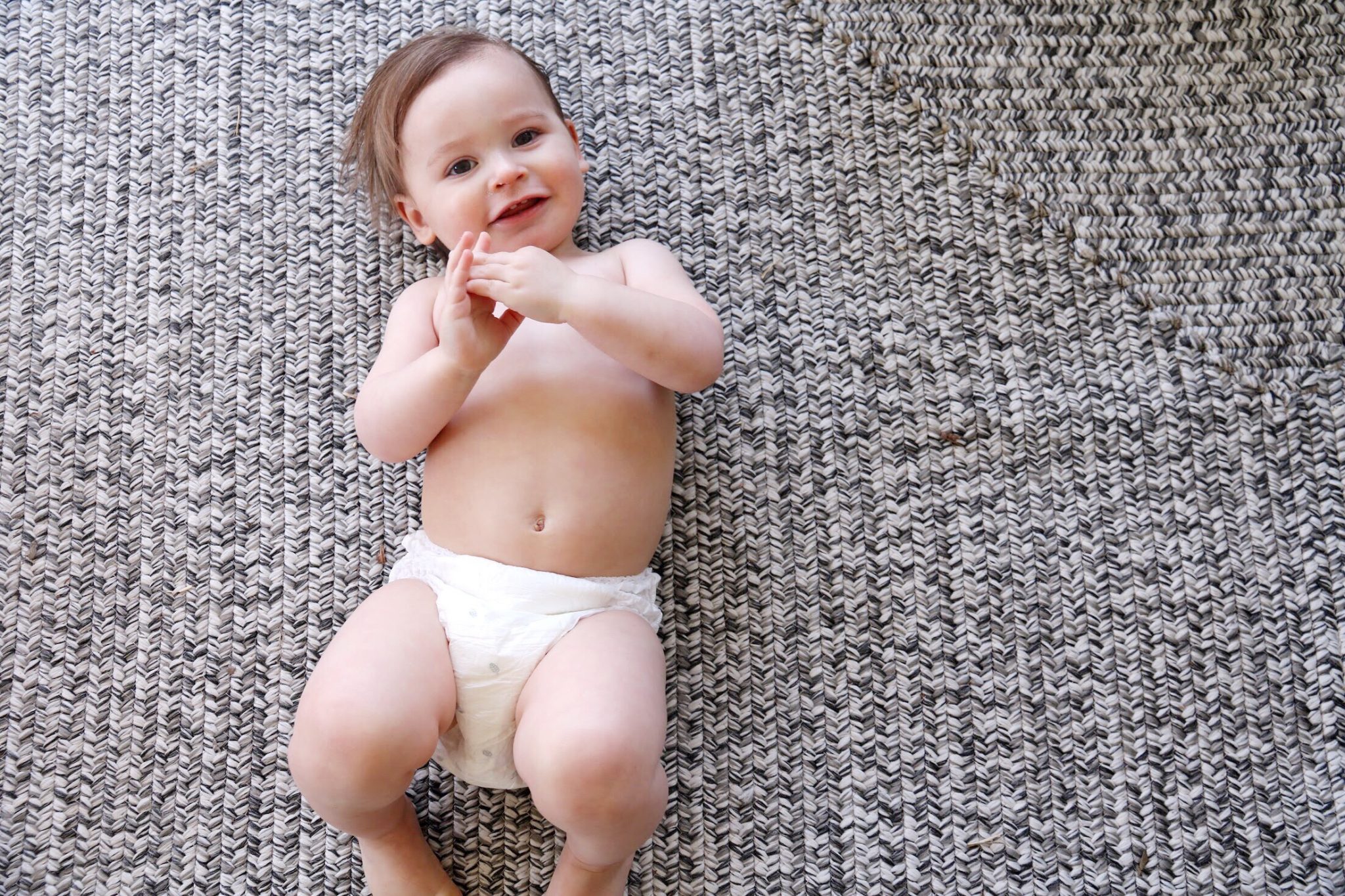 However, being that I was already dedicated to living this “natural mom” life. I knew there were tons of “not natural” things surrounding disposable diapers. So I did some research to find out what I should avoid when choosing which diapers to use for my new baby.

After hours of reading and learning, I found out some things that shocked me:

Dyes are often found in disposable diaper brands. Sure, the dye makes the diaper look “pretty,” but what’s going on underneath is not. For many sensitive-skinned babies, dyes in diapers are pinpointed as the cause of allergic reactions and skin issues.

Though dyes might be the lesser of evils as far as toxins go inside a disposable diaper, the prolonged exposure of a dye on my baby’s genitals was something I didn’t want. The fewer opportunities of a rash, the better, right?

While it’s an enticing idea to make diapers “smell good” to disguise the stench of a gag-me blowout, it’s actually a potentially dangerous idea for your baby. A baby’s skin, especially a newborn, is highly sensitive – and fragrances have been known to cause unnecessary irritation and disruption for baby’s developing body.

What many moms don’t know, is behind the word “fragrance” lies potentially dozens of toxic chemicals that don’t have to be listed on the packaging. Because of this, it’s best to just avoid fragrances altogether.

Dioxins are chemicals that are found in disposable diapers and are probably the most worrisome ingredient of them all. This family of chemicals is known to likely cause cancer in humans and is present in the chlorine-bleached ingredients of the diaper itself. Shocking, yet true, and seeping into the skin of your baby all day long. Need I say more? 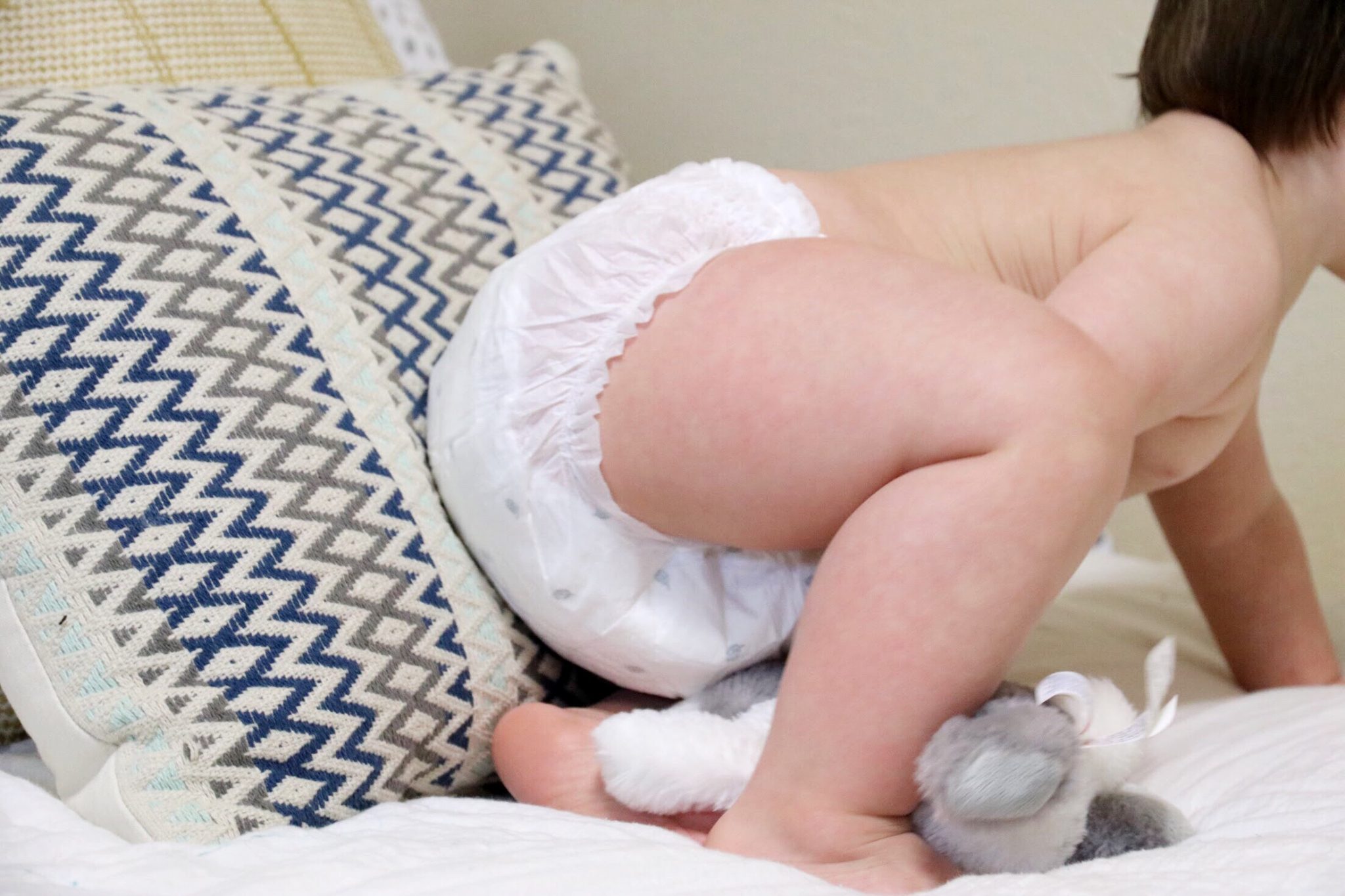 Disposable diapers are awful for the environment.

The average baby will use anywhere between 6,500-10,000 diapers before they are fully potty trained. And with as many babies as we have in the U.S., disposable diapers generate around 7.6 billion pounds of garbage each year.

Because disposable diapers contain high amounts of plastic, it could take hundreds of years for them to fully decompose. With mountains of dirty diapers sitting in landfills across the nation, it’s a breeding ground of disease that can potentially even contaminate our groundwater. And when toxins get into our groundwater (that’s then poured into your home) you and your family are exposed to things you shouldn’t be.

Knowing these facts probably shocked me the most. I hate to think that using conventional disposable diapers could be worsening our beautiful world – especially with as much as my kids like to poop!

After learning about the above risks, I tried out all the natural diaper brands. While I felt better about not exposing my baby or Mother Earth to unnecessarily harmful junk. I ran into another problem – my kids were peeing, and pooping, right through their “natural” diapers.

It got to the point where if I didn’t double-diaper them at night or change them immediately after they peed, like, once or fasten the tabs properly before an unexpected blowout, I’d have a big fat mess. I washed more sheets, scrubbed more onesies, and wasted more diapers than I can even count.

It finally got to the point where my frustrations were getting the best of me. I was surrendering to the fact that I was never going to find a disposable diaper brand that was not only safe but effective for my baby.

That is until Eco by Naty came along. 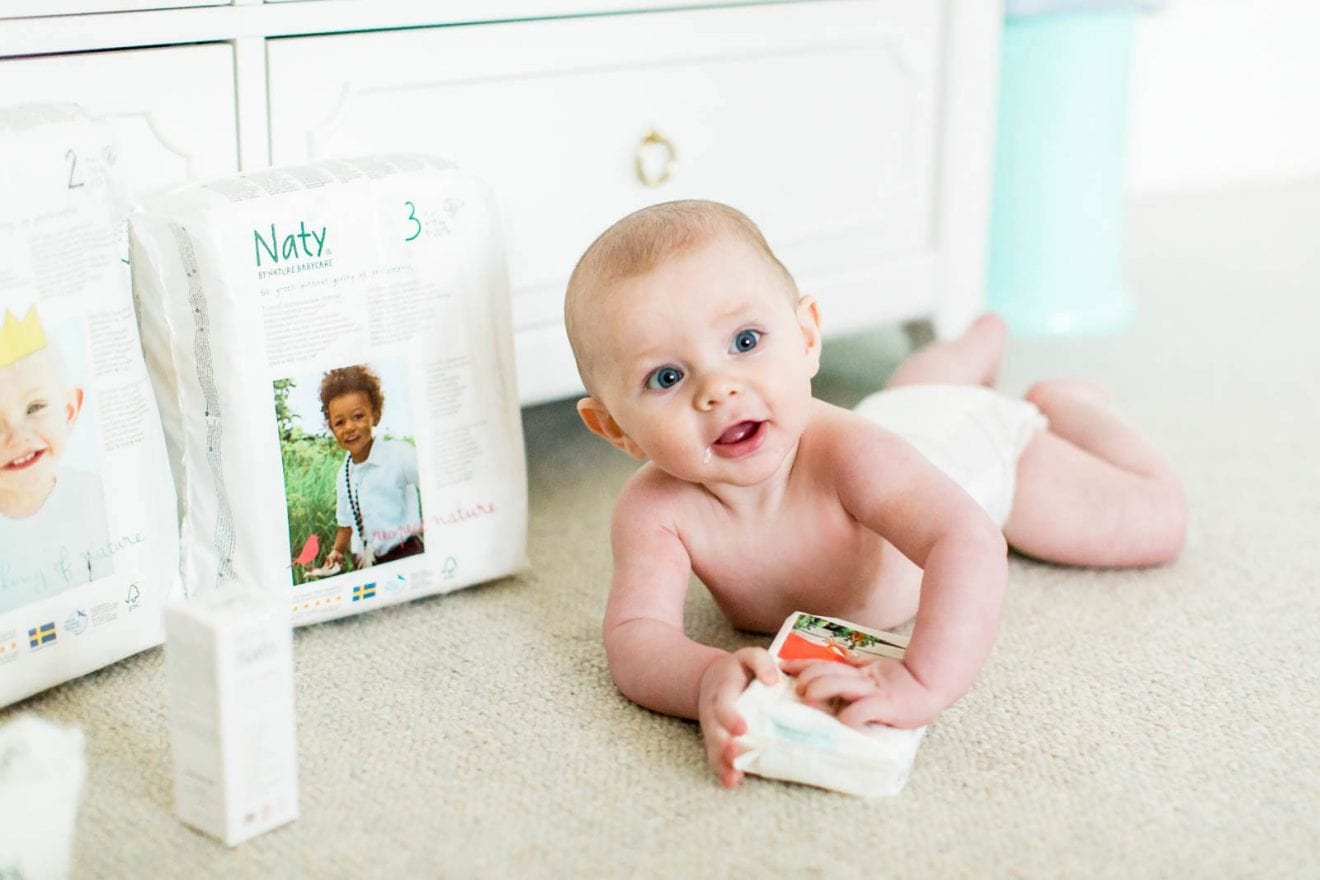 “Go Green without Giving Up Performance”

When I finally heard about the diapers and pull-ups from Eco by Naty, I was not only ecstatic to try them, but I was floored by how superior they are in the world of natural disposable diapers.

The company was created by a Swedish mom who wanted to protect her kids and the earth. When she couldn’t find a company doing what she wanted and needed, she decided to create her own.

Eco by Naty is independently tested and certified by the toughest ecological organizations.

Its the only diaper to receive two stars from Vincotte. On top of that, their diapers are 57% biodegradable and are the number one most ecological diaper on the market today. And since they do not contain any nasty chemicals, the diapers are excellent for preventing rashes and skin sensitivities. 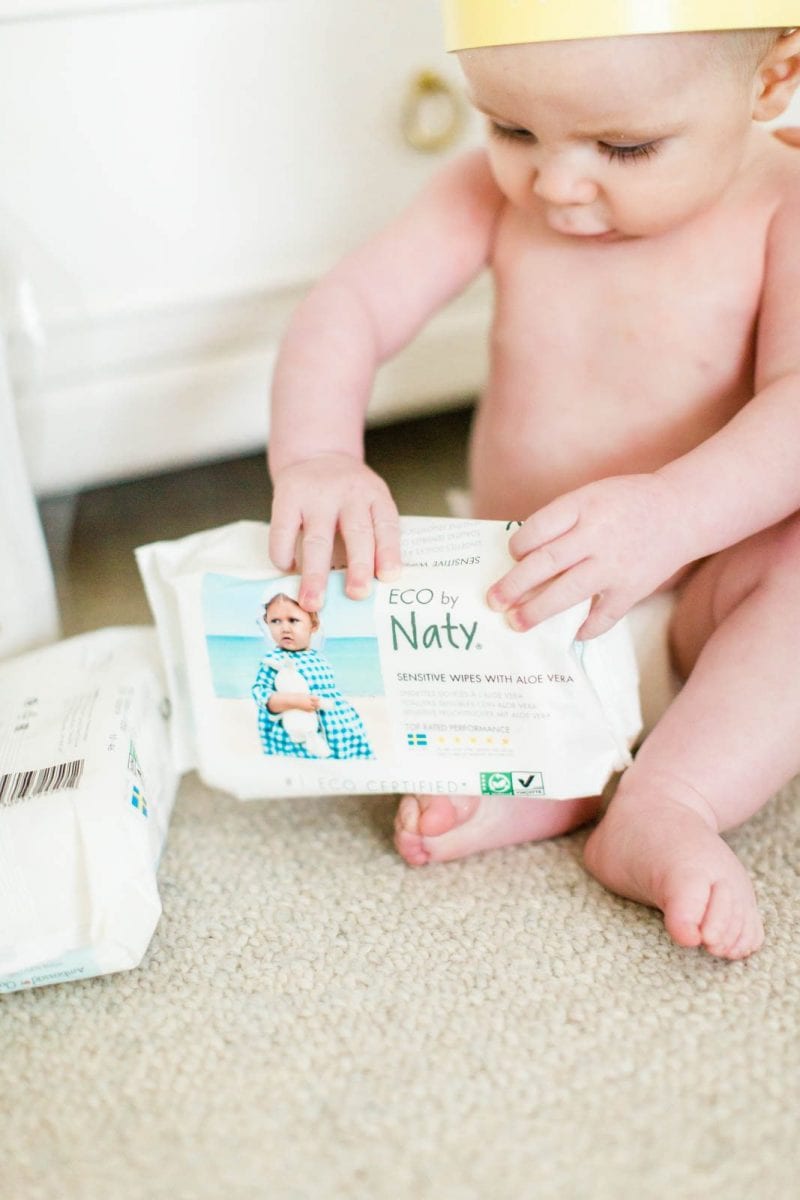 Even though on paper these diapers sound amazing. I was still nervous about the leakage aspect. So I expected to have the same experience I did in the past with natural diaper brands. Honestly, I didn’t have high hopes that these diapers would perform well. Boy, was I proven wrong!

Not only did these diapers do a phenomenal job preventing leakage altogether. They were by far the best out of every brand I’ve ever used on my two kids. I put just one diaper on my son and one pull up on my daughter at night. 12 hours later, there wasn’t a drop of pee on their sheets.

We’re very picky about brands of diapers. Mainly because of the 3 reasons listed above – the chemicals are unsafe, the diapers are unfriendly to the environment, or the brand would do an iffy job in performance. But once we heard about Eco by Naty, and once we tried it for ourselves, we knew we had to tell you guys about it, too. 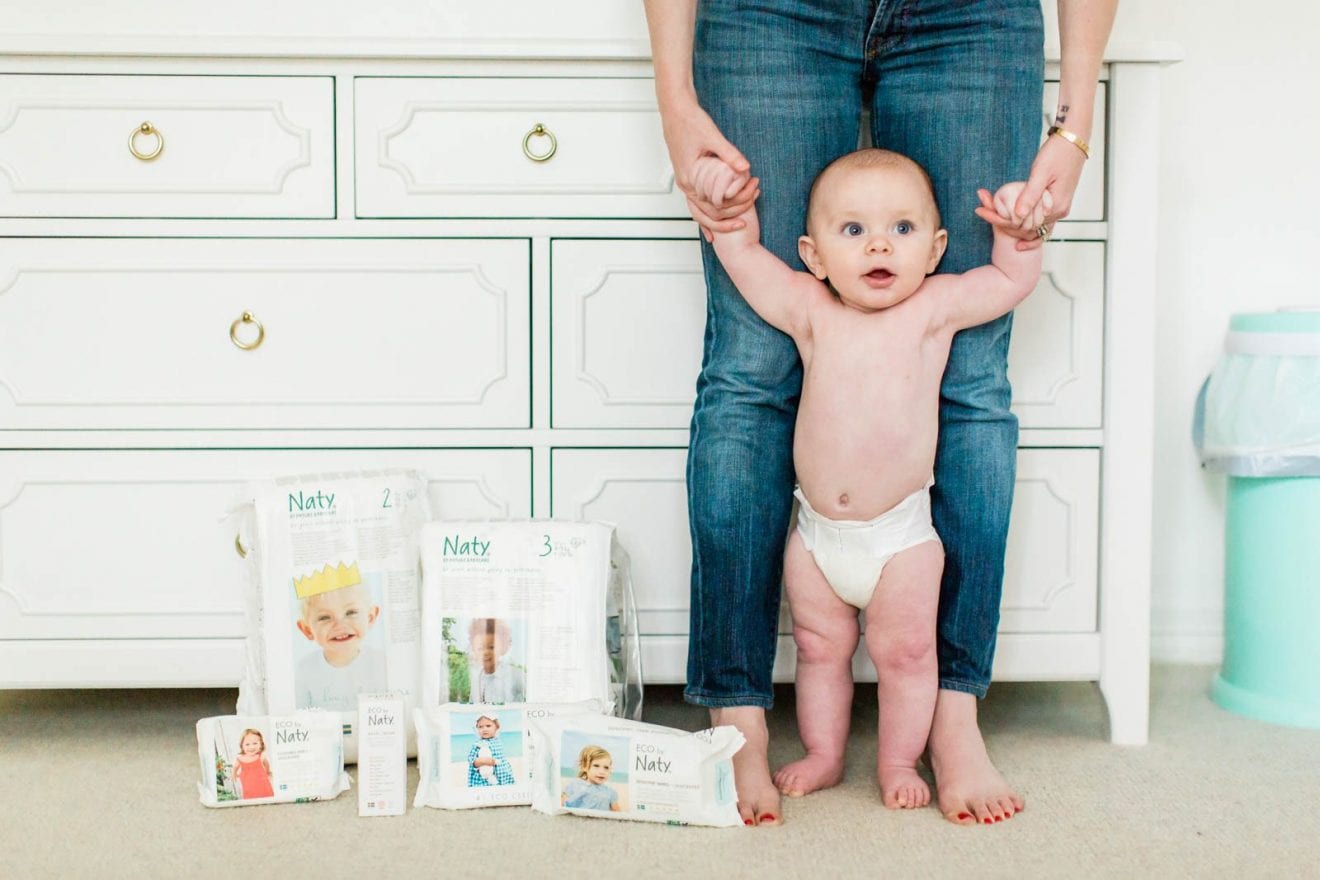 The best part is, you can try out these awesome diapers at 20% off! Just use promo code BABYCHICK20 at checkout when you purchase your baby products on the Eco by Naty website. This promo code is good until June 30th and it’s good for all products with the exception of subscriptions.

I will personally never use any other brand of disposable diapers from now on. Finally, because of Eco by Naty, every standard I have set for my babies has been met. And boy, does that make this momma feel great!

Best Tips for Going to Disney World with a Baby