The appearance of your baby’s teeth is an exciting milestone. We’re going to walk you through your baby’s teething chart and give you the details of which baby teeth arrive first and how soon the others will follow. 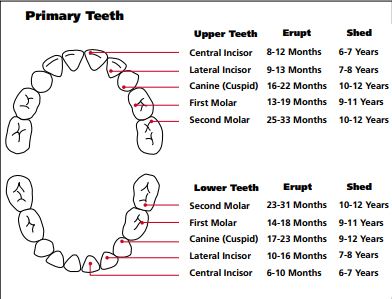 The lower front two baby teeth are “usually” the first to make a shining debut between 6-10 months of age. The top two incisors follow in quick succession, often between 8-12 months.

The upper lateral incisors erupt one on either side of the central. These make an appearance when your baby is between 9-13 months old. The lower laterals follow the uppers at 10-16 months.

The upper first molars appear between 13-19 months, one on either side of the jaw, followed by the lower first molars between 14-18 months. These teeth help your baby to chew more substantial food. Until then, babies mostly use their gums to mash food.

Next in line are the canines, also known as the cuspids. They emerge after the first molars have made an appearance. The upper canines usually erupt between 16-22 months of age, while the lowers surface by 17-23 months. These teeth fill the space between the lateral incisors and the first molars and give a more evolved smile.

They are the last of the baby teeth to surface in the jaw. They emerge behind the first molars, usually between 23-31 months of age in the lower jaw and between 25-33 months in the upper.

By the age of 3 years, most kids will have a complete set of 20 primary teeth.

A few “toothy truths” that all moms should know:

1. The development of baby teeth begins during the sixth week of gestation. Your diet should have adequate amounts of calcium, phosphorus, vitamin D, and Vitamin C to assist the growth of your child’s teeth and bones.

3. Teething charts are general guidelines. It is important to remember that every baby is unique. Some children may get their first teeth earlier, while others may get them later. If the first tooth’s appearance is not evident by the age of 15 months, it is time to check with your health professional and make sure that everything is okay.

4. Tooth development is hereditary. So, if you’ve got your teeth a little early or late, chances are your baby will too.

5. Teething may not always happen in the same order as the “norm.” So, don’t get anxious if your child’s teeth appear in a slightly different sequence.

6. Girls tend to develop teeth earlier than boys of the same age.

7. As soon as your child’s first tooth erupts, you’ll need to get into the habit of cleaning them.

8. Your child’s smile is the brightest it will ever be, as baby teeth are whiter than permanent teeth.

9. It’s normal for baby teeth to have spaces or gaps. There is a noticeable space between the lateral incisor and the canine in the upper jaw, while in the lower jaw, it lies between the canine and first molar. Baby teeth preserve this space for permanent teeth and guide them into their correct positions.

10. Baby teeth provide proper contact points for the tongue and enable your child to form words. Thus, they play a vital role in speech development.

11. Your child will begin losing his baby teeth around the age of 6 years. The first teeth to shed are usually the central incisors. You would notice the appearance of the permanent first molars around the same time. The last primary tooth is lost at the age of 12 and is either the canine or the second molar.