My Battle with Postpartum Depression

For seven months, we tried to get pregnant with our first baby. That doesn’t seem like a long time, looking back, but at the time, it seemed like it took forever. When I finally saw those two pink lines on my pregnancy test, I was so overwhelmed with joy and excitement, and those feelings lasted throughout my pregnancy.

You can imagine my surprise, then, when I struggled to find the slightest bit of joy in being a mother after our precious daughter was born. At first, my husband and I chalked it up to “baby blues.” I had a long and somewhat traumatic labor (over 40 hours!), and our baby was very colicky. I had a lot of trouble with breastfeeding, and I wasn’t sleeping much, if at all, at night. And naps during the day? HA! Right. So it was only natural, we thought, that I would be feeling less than chipper about this new motherhood thing.

Then the “unmotherly” thoughts started running through my head. Things like “this was a horrible mistake,” “can we take her back to the hospital,” “I’m not cut out for this,” “maybe I wasn’t meant to be a mother,” “how will I ever survive this.” I told my husband I felt like I was in mourning: for our old life, for what we had been as a couple before the baby, for being able to worry about myself and no one else. I told him I felt overwhelmed and very, very sad. He encouraged me to talk to our midwife and tell her how I was feeling. We had been told to watch for signs of depression and he felt that we needed to check in with her. But I refused.

Finally, around three months into being a mom, and after a night of trying to soothe an inconsolable screaming baby, my husband found me rocking our newborn while sobbing uncontrollably. Great, heaving sobs. He heard me from across the house and came to check on me. He laid his hand on my shoulder. He knew there was nothing he could say. There was nothing that needed to be said. “I can’t do this anymore,” I choked out between sobs.

My husband called our midwife the next day. He broke down on the phone as he described watching his strong, capable, tough-as-nails wife falling to pieces before his eyes. They conspired to set up a meeting for me to talk to my midwife the next day. At the meeting, she convinced me that my “baby blues” was, in fact, most likely postpartum depression; and that it was vital for me to get some help.

We discussed my options, and as much as I hated to do it, I chose to go on anti-depressants for as long as it took to get me over this hump. My midwife assured me that I could still breastfeed and not have to be on the drugs longer than necessary. She also encouraged me to reach out to other moms or ladies at my church and build a support network of women to talk with. Both my husband and I left that meeting emotionally spent but daring to see a glimmer of light at the end of the tunnel.

I remained on anti-depressants for nine months after my first child was born, and then, with my doctor’s supervision, I weaned off the medication. The weaning process was terrible. My doctor compared it to a drug addict trying to quit cocaine. Awesome, right? I was constantly dizzy or lightheaded. I was exhausted and felt weak. Emotionally, I was fragile, but I knew I was strong enough to continue the process. After about two months, I successfully weaned off the drugs and I was doing well.

Then I got pregnant again. We had been trying, but we expected it would take a while like it had the first time. It didn’t. After two months of trying, we were pregnant with our son. I was shocked and scared. Mostly because I wasn’t sure how I would handle a toddler and a newborn, but also because I was terrified the PPD would come back. Throughout my pregnancy, I researched the likelihood of it coming back and it was pretty high. I decided to do everything I could to prevent the reoccurrence of PPD, and one of those things was placenta encapsulation.

Placenta encapsulation is the “practice of ingesting the placenta after it has been steamed, dehydrated, ground, and placed into pills.” Sounds delicious, doesn’t it? I know, that’s what I thought when I first heard about it. However, it is a centuries-old practice, primarily used in eastern medicine, but it is gaining popularity here in the U.S. I did a LOT of research on it, including talking to many other mothers who have done it. The consensus seemed to be that, among other benefits, it was very efficient at balancing postpartum hormones and staving off PPD. Placenta encapsulation reportedly helps with:

With my history of pretty severe PPD, and the likelihood of it returning after our son was born, I was willing — if not excited — to give placenta encapsulation a shot.

And so, the day after my son was born, I started taking 3-5 placenta pills a day. The difference I felt in my mood, attitude, and energy levels was incredible. Both my husband and I noticed a significant difference in how I was handling my postpartum period and we were so relieved.

Then I ran out of pills. The number of placenta pills you get depends on the size of your placenta. I had a placenta large enough to cover three months postpartum. When I ran out of pills, I wasn’t overly concerned. I felt great and genuinely thought that I was over the hump of when any PPD would “set in.” But within a few weeks of living without the placenta pills, I started to notice some changes in my mood.

This time, though, it was different. I think that’s why it took me so long to figure out what was going on. Instead of feeling overwhelming sadness and despair and general feelings of being an awful mother, I would find myself flying into a sudden rage this time. It was as if a simple little thing would flip a switch somewhere deep in my brain and I would explode—at my husband, at my dog, at myself, but worst of all, at my tiny children.

Oh, mamas. I will never, ever get over the deep and shameful guilt I feel for the venom I spewed at my newborn son and two-year-old daughter. There are not enough tears in this world to wash away the shame I feel for how I acted and reacted toward my innocent babies. But I was not in control. My PPD, it turns out, had come back, but it presented itself as uncontrollable anger, sudden rage, and constant irritability this time. I didn’t recognize what was happening to me for so long because I expected the deep and consuming depression I felt the first time. Little did I know that PPD can take many forms. And anger was the form it took for my second round with it.

This time around, I tackled the PPD a little more proactively. I knew that I probably needed anti-depressants again, and so I went to the doctor and told him which ones worked the first time. He started me on a small dose and we worked from there. I was on the drugs for several months, and it did help to regulate my mood. I became less rage-y, more temperate, and a much easier person to live with.

Living with and battling my way through PPD has not been easy. It’s been tough for my husband and my kids. It is not a fun disease to deal with, but I have learned through this journey that having PPD is not something to be ashamed of. It is not something that I, or anyone else, can control. It is a condition caused by an imbalance of hormones, and it happens to more women than care to admit it. Statistics indicate that one in seven moms will get postpartum depression to some degree. That’s a lot of moms!

The good news is that postpartum depression is manageable, and it is not a permanent condition in most cases. The bad news is that many moms, and people in general, don’t know the symptoms of PPD. While the list of symptoms is long and can change for each woman, here are some common symptoms to look for if you think you or someone you know is suffering from Postpartum Depression:

If you suspect that you or someone you know may be suffering from PPD, please do not hesitate to reach out for help. It is so crucial, vital that PPD is treated as quickly as possible.

Mama, if this is you, please listen to me when I tell you that this is not your fault and you have nothing to be ashamed of. You are a GOOD MOTHER. You are a GOOD WOMAN. Do not be afraid to talk to someone, whether it be your doctor (a general practitioner is an excellent place to start), your OB/GYN, your midwife, friend, mom, or husband. If you don’t feel strong enough to talk to someone you know, here is a list of resources of places you can call specifically for postpartum depression issues. Please don’t wait to reach out. You don’t have to suffer through this and YOU ARE NOT ALONE.

Friends, we need to open up about this with each other. We need to let our fellow mom friends be our support system. The more we share “ugly truths” about motherhood with each other, the less these truths will have a stigma. Remember, we are all in this together! 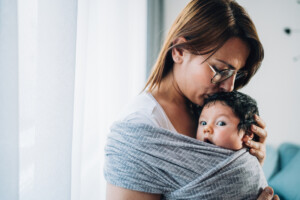