How to Prepare for the New Role: BIG BROTHER! - Baby Chick

How to Prepare for the New Role: BIG BROTHER!

Upon learning I was pregnant with baby #2, I was struck with an immense guilt over my first baby, Fischer, having to share me.  Even now at 38 weeks into this pregnancy, I’m still struggling with my feelings. But it has been somewhat therapeutic to introduce Fischer to the idea of becoming a big brother. It’s allowed me to wonder what this new relationship might look like and I’ve found myself dreamily zoning out to visions of him snuggling and kissing on baby. It’s also encouraged me to reach out to other parents, seeking advice, and their words and sweet pictures of their own babes interacting have helped immensely.

In the beginning of this pregnancy I agonized over how to tell Fischer about the new addition. I wondered how he’d react or if he’d even react at all. We celebrated his 2nd birthday shortly after we (officially) found out I was pregnant. While we took him to the first prenatal visit to hear the heartbeat and see the baby, I felt he was too young to grasp the concept of becoming a brother. So, we waited and just didn’t really acknowledge that anything was happening.

Turns out, talking about the transition was much easier than I thought and the concept naturally worked its way into every-day conversation. So, today I’m sharing how we’ve been prepping our big boy for his very important new role.

We didn’t really talk about it until I had something to show for it.

Leave it to a toddler’s natural curiosity; as soon as he began noticing my belly was a new shape the questioning began. “What that, mommy?” over and over. At first he’d ask if it was a boo-boo! After a few corrections he learned it was a baby inside mommy’s belly. I think he would’ve been confused or at least less interested had we begun pointing to my stomach when there was nothing to show. At such a young age, toddlers need something tangible to be able to grasp what you mean and certainly a flat belly with a baby inside would have been too abstract.

We point out babies when we see them.

When we see a new baby out and about, we talk about what it’s doing and that soon sister or brother will be here and doing the same thing. This works even better if there’s an older sibling around who can talk to Fischer and tell us or show us how they help with their baby. Fischer has begun pointing out babies on his own and their actions and while at Target one day, he said, “Mommy! Baby crying! I see baby, please?” He looked genuinely concerned and I was hoping it was a good sign until I asked him if he thought our baby would cry and he emphatically said, “no.” Boy, is he in for a treat!

We show him baby pictures of himself. 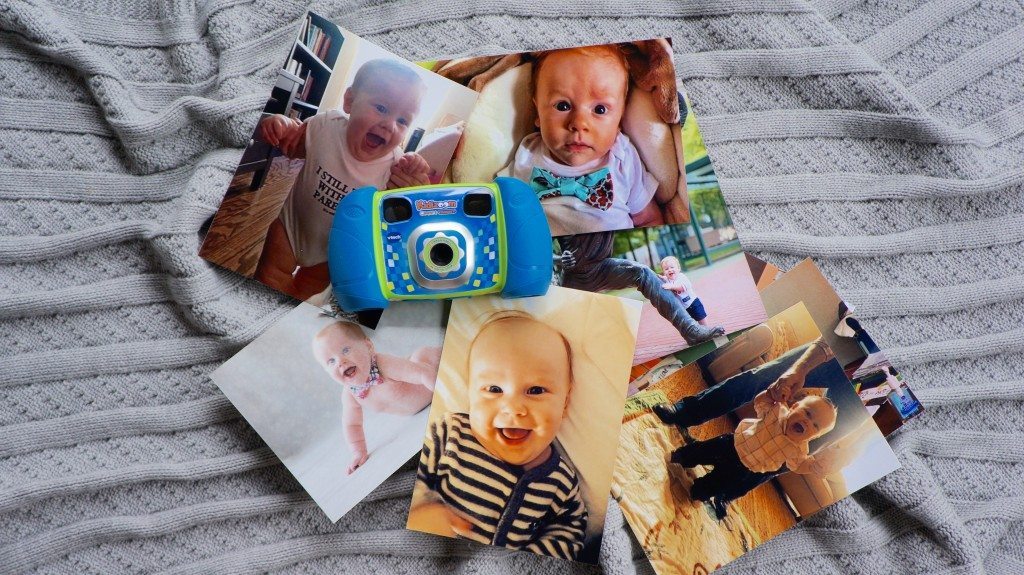 We like to explain that he used to be a baby but now he’s a big boy. He loves to point out “baby Fischer” all over the house then point to himself and say “big boy.” Lately he’s started stealing my camera or phone and taking pictures of me or himself (his selfie game is on point) or our dogs. So I finally bought him a little Vtech camera and have explained that he will soon get to take lots of pictures of his new brother or sister. He seems pretty excited about his new job!

We work the baby into normal conversations as often as possible.

I will try to work the new baby into everyday conversations. I’ll even ask if he and baby are going to do something together, even when it’s the most mundane of tasks (like unloading the dishwasher). Or, I’ll say, “I can’t wait until you can show baby ‘X.’” We even like to ask him what he thinks baby will do in certain situations, like “Where will baby sit?” or “Will baby sleep in the crib like you did?” We’re just trying to normalize the experience of having another kid around as much as possible.

We like to explain how he will be a role model.

Sometimes when we are playing sports or working on a craft I’ll ask if he’s going to teach baby how to do that too. I feel like this gives him a sense of ownership about the role he’ll play and I usually start with praise like, “You’re so good at (fill-in-the-blank).” We also try to mention sharing with the baby. I can’t wait to see how that pans out!

We read about it. 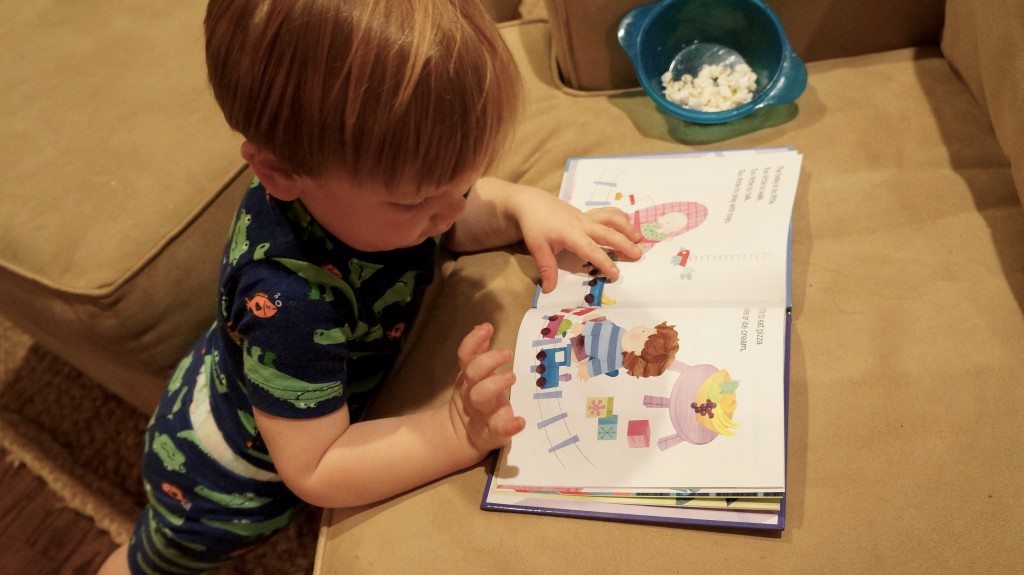 One thing that has helped is reading a number of books about becoming a big brother. We try to read at least one each day, and then of course he likes to “read” it to us. At moments like this, we try to incorporate talk about how he can snuggle with the baby and read to him or her very soon and how that will make mommy and daddy so happy. I think it’s also good for him to see and begin visualizing what having a baby around will look like and the ways in which he can help. I haven’t been able to find any good videos of this, but that would be another great way to explain the new relationship.

We’ve moved some baby stuff into “his” space. 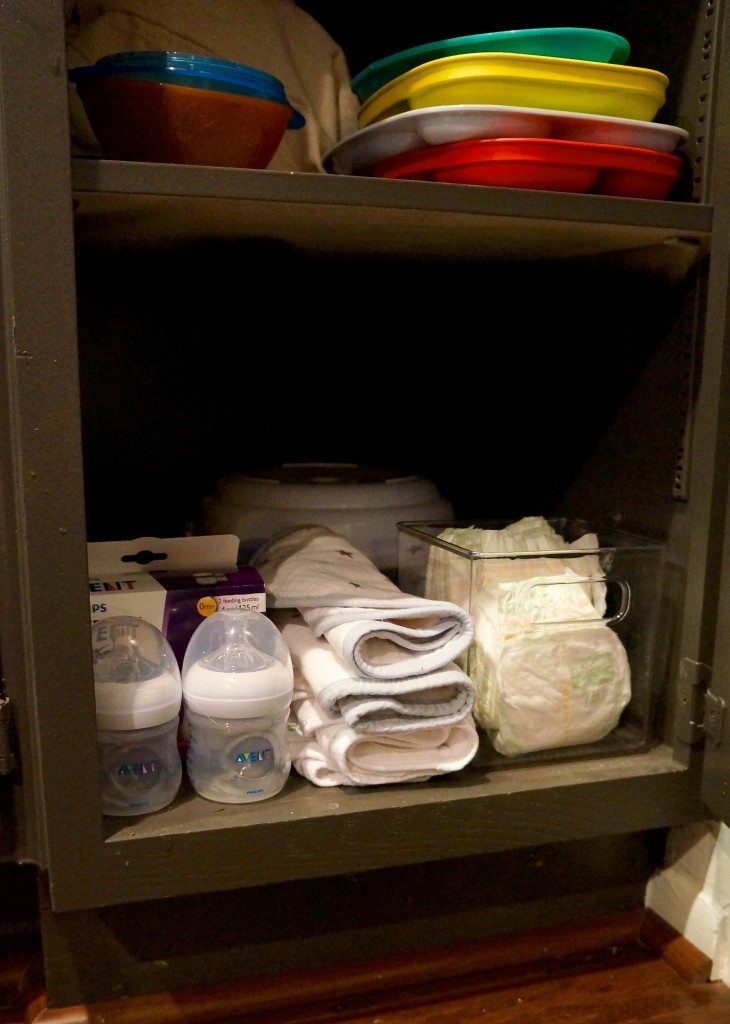 Fischer has an entire cabinet devoted to his stuff in the kitchen. Every day items are located within his reach. If he wants something or, at meal and snack times, I can ask him to get a plate/cup/etc. I’ve read and heard over and over “give them a job.” So we moved some his stuff that he doesn’t use often and made a shelf for the baby where Fischer can reach. This way he can run and get a bottle or wipes or burp cloth when I ask for his help. It also provides an example of having to share space with the new little person. Our next step is to move some of the bigger baby items, like the swing, into his playroom so he can get used to seeing them there. That should be interesting.

So far, we’ve only been met with genuine curiosity and excitement when the subject of the new baby comes up. I’m really happy about that, but I’m not so naive as to believe it will always be that way. I know we’ll weather our fair share of sibling rivalry and resentment about the newest addition to the family, but until then, I’ll bask in the sweet belly rubs and kisses and try to remember those moments forever.