Baby Sleep Regressions: When They Happen and What to Do

Baby Sleep Regressions: When They Happen and What to Do

Sleep is hard for many families to come by for the first few months and even years of life. The thought of a more considerable disruption, such as a sleep regression, can feel overwhelming. But what exactly is sleep regression? Why does it happen, and when does it strike?

What is a Sleep Regression?

Sleep regression is when children suddenly have trouble falling asleep or wake up more often at night.5 They are usually a symptom of significant developmental growth for a child. When a child begins to learn new and exciting milestones, they can often be distractors to sleep.4 Think of a time there has been so much happening in your life, and you finally get in bed, your mind idle and free to roam. You probably remember having difficulty sleeping because your mind could not turn off. For babies, learning new skills can be the same distraction to sleep.

When to Expect Sleep Regressions

Significant sleep regressions commonly happen around four, eight, and 12 months of age. Some may occur as they transition to toddlerhood. Sleep regressions naturally occur because of teething, which causes fussiness, illness like a cold or an ear infection, and life or routine changes such as a new daycare or changes to your work schedule.5 But they can also happen because your baby constantly learns about their new and exciting world.

The first sleep regression typically happens around four months.1 A child’s physical and cognitive skills are increasing. They learn many things, such as the first stages of rolling. They also learn to start recognizing faces and surroundings and even some real communication (of course, in the form of cute little babbles). The 4-month sleep regression is one of the only developmental milestones related to sleep.

During this time, your baby’s sleep cycles begin to mature. The sleep cycles start to lengthen, and you find more periods of wakefulness between each cycle, which often cause full wakings. These changes and new skills they’re learning often lead to additional night wakings or struggles during naps. This is typically the age when pediatricians recommend sleep training6 and helping your child build sleep routines that allow them to go back to sleep independently, rather than looking for assistance. From a development standpoint, you can focus on helping them develop their skills by playing games such as copycat and incorporating at least two hours of tummy time to help with their physical development, such as rolling.

At six months, your baby might go through another round of sleep regression with more waking at night, more difficulty getting back to sleep, and possibly more crying.2 They may also nap longer during the day. This regression is likely related to increased physical abilities and awareness of their surroundings.2 Some babies might do better starting sleep training at the six-month mark instead of at four months, but you should always check with your pediatrician.6

The next significant round of sleep regression typically happens around eight or nine months. Physical and cognitive abilities such as crawling and pulling themselves up also increase. The babbles are more apparent, and you may even hear some words forming. Emotionally, they may begin to develop separation anxiety. All these developments can lead to bedtime struggles and wakings. They may also be teething, which can lead to fussiness.3

Sleep regression at 12 months is often because many children begin to walk at this age. They also start turning their babbles into words. So, it isn’t a surprise that these exciting new things make sleep feel like it’s a boring part of the day.

A few regressions can occur after 12 months, but most are not as common or disruptive. These regressions usually happen around 18 months and 2.5 years, when the wonderful world of toddler development occurs. Between 18 months and three years, your child will experience much growth, not just physically or verbally, but emotionally and cognitively.4 Toddlerhood spurs new awareness of boundaries, controls, and more complex emotions that can cause much disruption at night. Regressions around these ages are less likely to happen but follow significant developments, just like they do at four months, eight months, and 12 months.

How Long Does a Regression Last?

While regressions seem so disruptive, they don’t last forever! Most of these regressions will typically last up to two weeks.6 The best way to determine how long a regression might last depends on how fast a child masters new skills and adjusts to new sleep needs or patterns.

Tips to Keep in Mind

Here are some tips for getting through a sleep regression with your little one:5

Creating consistency gives them the most considerable relief of control. Consistency can mean following rules (especially for toddlers), having the same responses to situations, and sticking to a schedule.4 Having a routine and a set of expectations helps a child through significant sleep transitions, including a change to a toddler bed!

Remember, your baby’s sleep regression won’t last forever, especially if you can create and stick to a routine. Contact your pediatrician for advice if you are concerned that your baby’s regression is lasting longer than it should. Being consistent with schedules and encouraging their independence to self-soothe can go a long way to helping them and you get through these rough weeks. 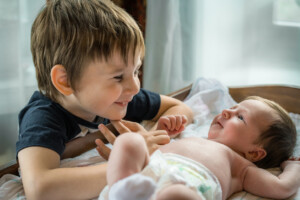 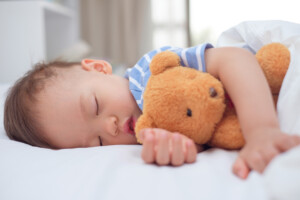